Robert Linnehan, Regulatory Writer and Editor at affiliate XLMedia, discusses US sports betting interest in the 2026 World Cup, when it is likely to peak – and the regulatory state of play when it does. 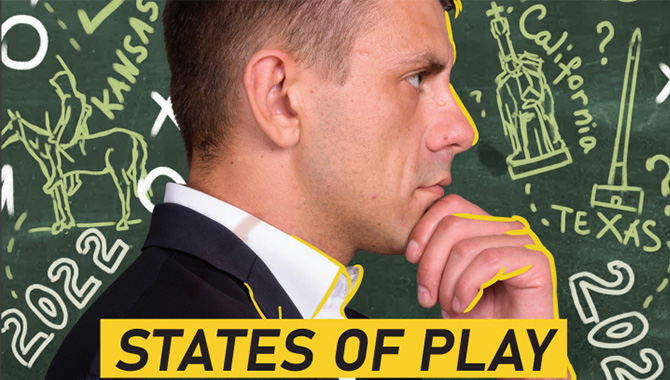 The World Cup 2022 is fast approaching. For sports betting businesses outside the US, it has always been a gold mine. Traditionally, this has been less prominent in North America – for two reasons. Naturally, soccer is not as big stateside as NFL, NBA NHL and MLB. That is changing.

The other was a lack of regulation. Yet, with over 30 regulated states, along with the District of Columbia, the country’s legal gaming market has also flourished since the overhaul of the Professional and Amateur Sports Protection Act (PASPA) in 2018. The last World Cup, coincidentally, took place in 2018, just a month after PASPA was overturned. US sports betting was very much in its embryonic state then. Although unregulated sports betting did, of course, exist pre-PASPA (1992), US soccer interest only really took off after the nation hosted the 1994 World Cup.

The advent of the 21st Century globalised soccer, along with most other things, on a scale not yet seen; multi-million-dollar TV deals, a revitalised MLS and the rapid spread of sports in social media culminated in soccer underpinning its own online global village.

In 2020, 22% of Americans between the age of 18-29 professed to be fans of the sport, according to research. Perhaps a low percentage compared to other regions worldwide, this represents some of the highest levels of US engagement with soccer. Ever since the overturning of PASPA, the number of US players betting on soccer has increased too. Now, with US sports betting maturing into its fourth year, the upcoming World Cup in Qatar this winter poses something of an acid test for US interest in a globally adored sport.

There’s one difference in 2022, though: the Qatar World Cup takes place in November, which is the peak of both the NFL and NBA seasons – hugely popular leagues of interest for millions of Americans. In fact, this is something Robert Linnehan, Regulatory Writer and Editor at XLMedia, feels will deter potential sports betting interest in the World Cup 2022. “With the World Cup being a big event, I could see it being fairly popular. However, the main reason I feel the event won’t reach the highs is that it’s not in the summer; it’s at the height of the NFL and NBA seasons. If it were in the summer, I could see there being much greater interest as there is usually a lull in the summer months. The only thing to bet on in the US across the summer is baseball and some NFL bets for the following season. But starting in November, with other events going on, it’s not going to be as popular as it would have been.”

However, where Linnehan holds real hope for soccer betting interest is the 2026 World Cup – set to be staged in the US, Canada and Mexico. He tells Gambling Insider: “I think for 2026 handle will be much greater. Not only because the World Cup will once again be in the summer but, of course, being a home tournament for the US means interest will naturally pique. So I think handle and the popularity of the event will be far greater come 2026.” These are not the only predictions Linnehan has for 2026, with the US sports betting market ever-expanding. Kansas is just the latest in a long line of states to agree to launch online sports betting, announcing its plans in August 2022. Kansas launched on 1 September, with the likes of FanDuel, DraftKings, Caesars, BetMGM and more. Linnehan also discusses the states striving for regulation that are set to host World Cup matches in 2026. Below is a list of cities confirmed to host World Cup fixtures. Regions where sports betting is not currently regulated are capped and bolded:

A number of states set to host World Cup games are yet to regulate sports betting. How many of these can you see being legalised come 2026?

Well, I can’t see them all legalising. I can see Georgia happening. It seems every year they get close, but they never quite manage to get anything over the finish line. I could see them legalising sports betting by 2026, absolutely. You also mention California, which is going to be a big point of contention in the upcoming November general election. California voters will likely have two sports betting referendums that they’ll be deciding on in their November ballots. One would restrict sports betting to California’s tribal casinos, a second would legalise online sports betting; this would bring in all the big national operators, DraftKings, FanDuel etc. They would be able to partner with tribal casinos to offer online sports betting. California could technically be legal next year; they could launch next year. Even if referendums aren’t approved this year, I can see them absolutely trying again. The year 2026 is four years away, so I could see them try again and be legalised.

Every year, Massachusetts gets close. This year they have a bill they’re discussing which is currently in a committee, where members of the Senate and members of the House are trying to reach an agreement on sports betting. There are two bills, one Senate-approved and one House-approved, but these bills are very different in terms of their potential tax rates, and allowances around college sports betting and amateur sports betting. They’re trying to find common ground now and there could be some movement on that before their legislative session is over in July 2022.

It would be almost disastrous if Massachusetts didn’t have sports betting by 2026 in some form or another. Every year it comes up in the state’s legislative sessions, and this is the first year that it’s had two bills approved by the Senate and the House. It seems like they’re finding enough common ground, where if it doesn’t get done this year, it will get done within a year or two.

Regarding Florida, it’s a big unknown right now. Florida and the Seminole Tribe agreed on a new gaming compact last year. This allowed the Seminole Tribe to offer retail sports betting and online sports betting. However, a federal judge found the gaming compact violated the Indian Gaming Regulatory Act (IGRA), so the whole gaming compact was thrown out. Right now, the case is in an appeals court, where the State and the Tribe are trying to see if they can overturn that ruling. This decision is still months away (at the time of writing) and in my opinion, it’s unlikely anything is going to happen there. DraftKings and FanDuel tried to get a sports betting referendum on Florida’s November ballot, but didn’t get the necessary signatures. They can try again in 2024, a time some politicians tell me is the likeliest for the state to legalise sports betting. It’s really a waiting game. But again, 2026 is four years away and anything can happen in that time. This would exclude online sports betting which was found to be illegal under IGRA, but retail could legalise before 2026.

Texas? I laugh, because I can’t see a pathway for the legalisation. It’s always been a very conservative state and those trying to push sports betting have a lot of opposition. The topic comes up every now and again, but its next legislative session isn’t until 2023. I don’t see a pathway to it right now unless something drastically changes. They could try and get a sports betting referendum on one of the upcoming ballots, which would likely be the path that faces the least resistance. But there are a lot of religious groups and conservative views which go against sports betting. I’ve sat in on a lot of meetings and religious groups vehemently reject the idea of sports betting in Texas, so the chances of anything happening by 2026 are very slim.

If Texas were to become legalised it would be a top-three market in the US. Will it ever be legal? I don’t know. I keep saying 2026 is four years away but with Texas, four years might not be enough time to get anything done. If I had to guess, I would say there’s a chance a sports betting referendum is approved by voters because it would be the easiest way to legalise sports betting. But it wouldn’t surprise me if we’re sitting here in four years and they’re still discussing it.

Will US jurisdictions slowly start to adopt European-style regulations, which is something Ontario has done from the start?

I think US markets will remain open in comparison to Europe and Canada. If anything, you’ll see other states legal by 2026, aside from the ones we’ve spoken about. North Carolina in particular looks like it will get something done, so minor market states I think we’ll see legalised by 2026. I can’t see the regulations changing all that much; it’s been pretty boilerplate for these states moving forward. There is one thing you may see, and I think you’d only see it in New York over any other jurisdiction. New York has a 51% tax rate right now, which is one of the highest tax rates on gaming revenue in the country. So something may be done around this tax rate, because I don’t think many operators are going to put up with that high of a tax rate in any other market. At the moment, New York is obliterating handle records left, right and centre. Online sports betting handles that have stood since 2018 are being surpassed in six months, which is insane.

Operators can put up with that when they’re raking in millions of dollars, but for how long handle stays high remains to be seen. Overall, I can’t see regulations getting any stricter; I think where they are right now is where they will stay four years from now.

As US states continue to legalise, can you see many more operators, suppliers and affiliates migrating from Europe to the US?

Definitely. I think if and when some of the bigger markets legalise, particularly if Florida and California went legal, it would send a big buzz over Europe that the US is truly alive as a gaming industry. Everyone is going to want a piece of those markets. I think California would rival New York as the top sports betting market easily. Florida would be right up there, too. Regardless, more European operators will continue to trickle into the US – the ones that haven’t already. European operators may bring a unique perspective,  providing a one-of-a-kind opportunity for US players they would never have experienced. Better games and technology: these factors would pique the interest of US players too. There are some big operators like bet365 which we have barely seen here yet. So there’s some movement to be had there – and some development to be seen in the US before things become fully clear.