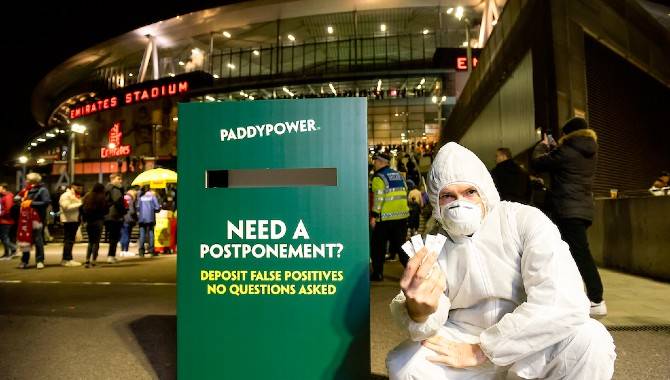 Paddy Power has poked fun at Liverpool Football Club by unveiling a ‘false positive amnesty box’ outside the Emirates Stadium before last night’s match against Arsenal.

It comes after Liverpool reported a Covid outbreak at the club at the beginning of January, with manager Jurgen Klopp and players Alisson, Joel Matip and Roberto Firmino all contracting the virus.

And the rising cases at the Merseyside outfit led to the club applying to have last week’s first leg of the Carabao Cup semi-final with Arsenal postponed, with the English Football League accepting the request.

Further testing, however, revealed that almost all of the Covid tests were registered as false positives.

And bookmaker Paddy Power has, as ever, seen the funny side of things, stationing the ‘false positive amnesty box’ outside the stadium in north London for all to see. It jokingly offered Liverpool the chance to avoid any problems about future postponements, promising to “get games off for them with no questions asked!”

“We know clubs just don’t want to play some games but managers get grumpy when people question their reasons,” said Spokesman Paddy Power. “But don’t worry Liverpool and Jurgen, Paddy’s medical team is on hand to get those postponements for you.

“Just drop your ‘false positive’ tests - wink - in our special deposit box and it doesn’t matter if it’s Covid, AFCON or your mum’s birthday as to why you can’t make it, we’ll make sure you never have to play a game you don’t want to ever again with no questions asked!”