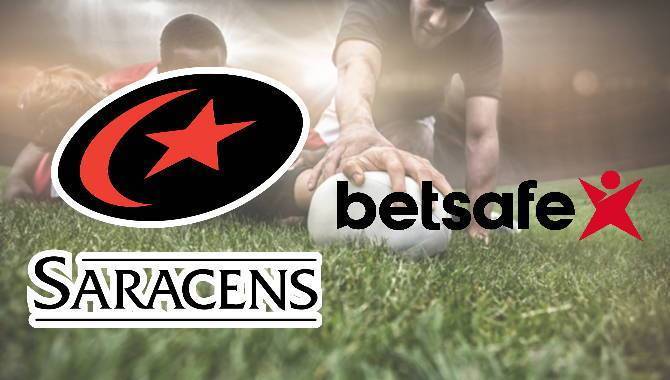 ne bookmaker Betsafe has announced the signing of a three year sponsorship deal with Aviva Rugby Premier league side Saracens FC, a deal which will see Betsafe become the clubs official betting partner.

Under the terms of the sponsorship deal, Betsafe branding will appear on European Champions Saracens home and away shirts from the start of the 2017/18 season, featuring prominently at the clubs 10,000 seater Allianz Park stadium. The deal represents the first time that Betsson Group or any of its subsidiaries have sponsored a rugby club.

Company branding will also be featured at the upcoming London double header at Twickenham in September, which marks the traditional opening to the rugby season.

In a statement announcing the sponsorship deal, Nicola Fitton, Managing Director at Betsafe, said: “We are delighted to announce our new partnership with Saracens today. Saracens is a club that is defined by professionalism, desire and outstanding performance and these are values that we reflect every day at Betsafe.

We firmly believe that passion always overcomes the odds, and there is no passion like that of a Saracens fan or player. We are delighted to be part of the Saracens family and we look forward to supporting the club going forwards.”

Saracens Chief Executive Heath Harvey added: “We are delighted to welcome Betsafe as a sponsor of the club. They are a company with a proven track record of partnering elite sports teams in the UK and we look forward to a long and successful partnership.

We believe that we have partnered with a company who are extremely ambitious and have a drive and passion for innovation ¬ values that we can strongly resonate with at Saracens.”