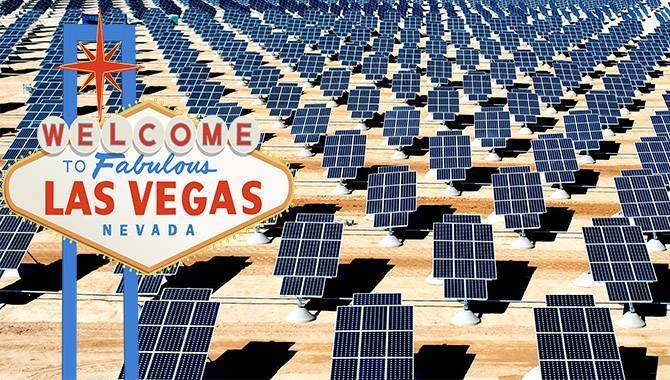 There has been a substantial drive by major US casino industry companies to become more environmentally friendly as the benefits of clean energy have become more apparent in recent years.

Caesars Entertainment, MGM Resorts International, and Wynn Resorts have all made large-scale efforts to modernise and reduce their energy consumption in an attempt to clean up their environmental impacts and their images.

What is perhaps most amazing is the fact that the companies are headquartered in Las Vegas, which has meant that traditionally they had to rely on energy from outside sources, such as the nearby Hoover Dam.

Its once perceived weakness of being placed in the middle of desert could now become its strength as improvements are made to solar energy and public opinion has shifted to favour alternative means of energy production.

Just this week Caesars announced its targets to drastically reduce greenhouse gas emissions by 95% by 2050, from the company and throughout its supply chain. This carbon and management strategy is part of the company’s CodeGreen environmental programme which was established in 2008.

Caesars have actually already managed to make large-scale progress within their organisation through the programme, having already reduced its total green house gas emissions by 22.9% since 2011.

"Caesars Entertainment has a well-established track record of successful environmental sustainability progress, and establishing science-based targets further demonstrates our commitment to reducing our impact on the planet," said Mark Frissora, President and CEO of Caesars Entertainment. "We are proud to be part of this global effort."

MGM have also made substantial sustainable drives over the past few years, and recently in April announced the development of a new 100-megawatt solar array, which is set to produce clean, renewable energy for the company’s 13 Las Vegas casino operations.

At full production, MGM claim that the solar array in the Dry Lake Solar Energy Zone in Nevada will provide 90% of its total daytime power needs across all of its Las Vegas Strip properties.

This solar energy project was not the company’s first, having also built the largest rooftop solar array in the whole of the country, located on top of their Mandalay Bay Convention Center.

"Protecting the planet is a business imperative for MGM Resorts and it is our responsibility to find innovative ways where we can use clean energy to power our resorts," said Jim Murren, Chairman and CEO of MGM Resorts International. "Incorporating renewable energy into MGM's portfolio will fundamentally reduce MGM's environmental footprint."

Wynn Resorts have also just taken a large step in becoming a more sustainable company by opening the Wynn Solar Factory, which began its commercial operation on 2 June. The project offsets up to 75% of the company’s peak power needs with renewable energy.

The announcement of the completion of the solar factory was accompanied by the creation of a new role at the company. Wynn Resorts announced that it would be promoting Erik Hansen their first Chief Sustainability Officer.

Commenting on the newly completed solar factory Hansen said: "Nevada is the most dynamic state for renewable energy development, and the opening of the Wynn Solar Facility is a watershed moment for the resort industry. The investment in renewable energy and the integration of energy efficient measures must be a larger part of the way responsible companies conduct business today. Our solar facility proves that integrating large-scale energy efficient measures can be done in a way that benefits the bottom line while also enhancing the guest experience."