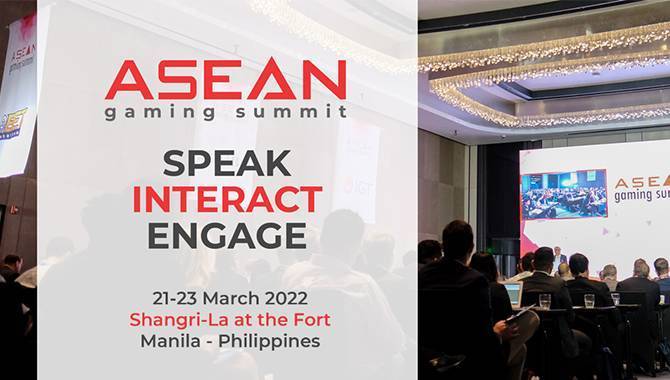 Asia Gaming Brief, the organizer of regional gaming conference the ASEAN Gaming Summit, has confirmed the much-awaited return of its yearly conference on 21-23 March, 2022, at the Shangri-La at the Fort in Manila.

The conference, known for gathering influential gaming executives from the Philippines and across Asia, has been on a two-year hiatus as Covid-19 made it impossible to safely host a physical event.

However over the last few months, Manila in particular, has been making enormous strides to reopen its economy. Just this week, Metropolitan Manila Development Authority (MMDA) Chairman Benjamin “Benhur” Abalos Jr. announced that Manila’s population is expected to reach 92 percent vaccination status by December. This has given Asia Gaming Brief confidence about the viability of its planned March dates in 2022.

“We’re excited to be able to bring back the ASEAN Gaming Summit next year, and we are encouraged by the rapid vaccination rate in the Philippines, particularly Metro Manila,” said Felix Ng, conference director at Asia Gaming Brief.

“We’re now gearing up to bring the industry its first conference in Manila post-pandemic, aimed at reigniting growth in one of Asia’s biggest gaming jurisdictions. We look forward to welcoming anyone looking to reconnect with the gaming industry in Asia once again.”

The three-day event is expected to bring around 300 gaming executives from Asia’s land-based and online gaming industry, including the region’s regulators and government officials.

“Our 2022 event will be bringing back our world-class conference, with a packed agenda made up of some of the industry’s most influential players. Taking center stage this year will be our networking activities – which are aimed at bringing business partners together, new and old,” Felix Ng highlighted.

The ASEAN Gaming Summit will be held on March 21-23, 2022 in Manila. Registrations are now available.

From information, connections, to introductions, Asia Gaming Brief is your gateway to Asia. AGB is a market intelligence, events, and networking company focused on Asia Pacific’s rapidly expanding gaming industry. With their vast network of contacts across Asia’s land-based and online gaming industries, they have their finger on the pulse of all things gaming, from the latest trends and hottest products through to changes in regulation and emerging jurisdictions.

Over the last five years, ASEAN Gaming Summit, a three-day gaming conference in Manila, has become known for becoming the intersection point between both sides of the industry – promoting a platform for information exchange and contacts across Asia’s land-based and online gaming industries. At Asia’s firstgaming conference in 2022, there are plenty of opportunities to network, catch-up and form business partnerships through a variety of networking events, all of which will adhere to the most current health and safety measures.