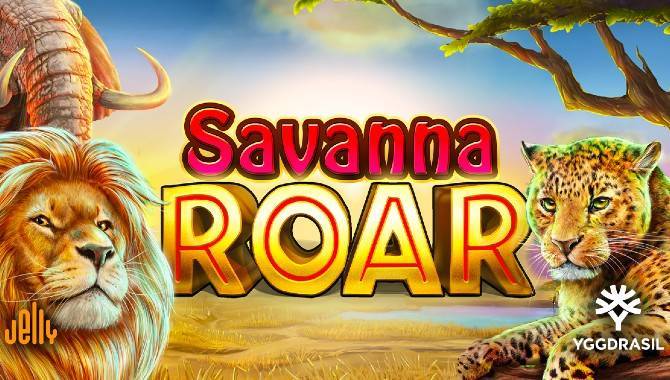 Yggdrasil, the leading worldwide publisher of online gambling content, invites the most daring and intrepid adventurers to the hot, dusty African plains to come face-to-face with ‘Big Game’ in the latest YG Masters hit, Savanna Roar, developed in partnership with Jelly.

Savanna Roar is a 5x4 slot with 1024 ways to win and is the first title from Jelly after penning the deal with Yggdrasil as part of the YG Masters program.

The game, set in the expanse of the African grassland, described as a ‘quest to be king of the savanna’, pays homage to each of Africa’s legendary ‘Big Five’ with its four randomly-triggering base game modifiers and the coveted Big Cat free spins bonus, and can award players with a max multiplier of 9,544x.

Leopards prowl the reels with awesome menace to increase the chances of winning big prizes by turning leopard symbols Wild on triggering ‘Wild Leopard Spotted!’, with the fearsome sight of the ‘Rhino Stampede!’ across the reels, randomly transforming reel positions into Mystery Symbols, offering-up the potential for even more winning lines.

Landing ‘Buffalo Charge!’ lets the mighty Buffalo roam across the reels and spread to adjacent positions, building the anticipation of greater rewards, while hitting the ‘Untamed Elephant!’ sees the Elephant’s intimidating presence grow up to a colossal 3x3 symbol, proving it is the undisputed monarch of the reels.

The ‘Big Cat’ Free Spins bonus can award players up to 25 free spins, and unleashes the ‘Wild Leopard Multiplier’ to turn all leopard symbols wild and award multipliers of up to x3, and the ‘Savage Lion’ to make Savanna Roar symbols wild, giving players the chance to land huge wins.

The game’s clear-cut mechanics ensure fun and engagement while the multiple features bring a sense of pure slot enjoyment, capturing the attention of those that prefer simplicity and smooth gameplay.

Stuart McCarthy, Head of Partner Programs at Yggdrasil, said: “Savanna Roar brings slot gameplay back to basics, whilst remaining engaging, entertaining and full of win potential at all times. It is yet another creative addition to our YG Masters portfolio with a familiar theme, and is a good demonstration of what a young studio can achieve with the right industry understanding.

“With its aptly-named features, players can enjoy the differentiating aspects that the animals bring to the game.”

“We share Yggdrasil’s vision to raise the bar of the quality, variety and entertainment of mobile gaming, and we believe that Savanna Roar is a strong start to our journey, and there's plenty in next year's roadmap that looks pretty tasty as well!”