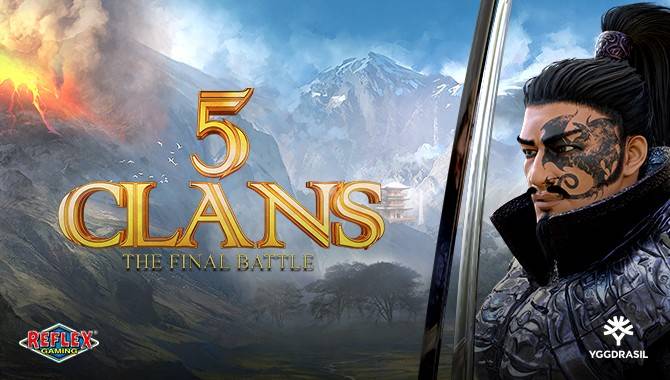 The slot is set in a fantasy world, where the five clans of Dragon, Fire, Ice, Lion and Wolf battle to control the central lands.

5 Clans: The Final Battle™ offers players a thrilling adventure which features the five brave and charismatic tribe leaders who come alive with the game’s high-end animations, visuals and sounds.

Landing the clan shield-emblems can trigger the game’s six features. The Gold Shield is the bonus symbol which can reward nine free spins when the symbol lands on reel five. The Red Shield will change the reel into a Super Wild and award a free spin. Landing Super Wilds mean even more free spins, with all the wins accumulating and paying out once no more free spins are left to play.

The Blue Shield acts as the game’s accumulator offering up to x50 the player’s stake. The Green Shield symbol will change other symbols into a wild and award a free respin with the wild stuck in place.

The final feature is awarded by landing the Purple Shield symbol, triggering a free respin when landing on reel 1. When no more shields have landed, the shields will animate to one of the top characters, adding a further engagement element to the slot.

The game is Reflex Gaming’s latest release as a YG Master partner and the title is powered by GATI, with Yggdrasil’s state-of-the-art technology enabling partners to employ the preconfigured, regulation-ready, standardised development toolkit to produce consistently cutting-edge content followed by rapid distribution.

Stuart McCarthy, Head of Product and Programs at Yggdrasil, said: “Five Clans: The Final Battle™ gives fans an immersive and feature-filled slot in which they join the battle of five opposing clans in their quest of securing huge wins. With high-level alluring graphics, combined with the animation of clan leaders, we can’t wait to see how our fans react to the game really coming alive.”

Mat Ingram, CPO at Reflex Gaming, said: “We are very excited about this release with the game offering a proven maths model combined with beautiful illustrations and six immersive features. We are thrilled with our partnership with Yggdrasil so far which allows us to produce premium titles and ensures fantastic distribution via Yggdrasil’s impressive operator network.”