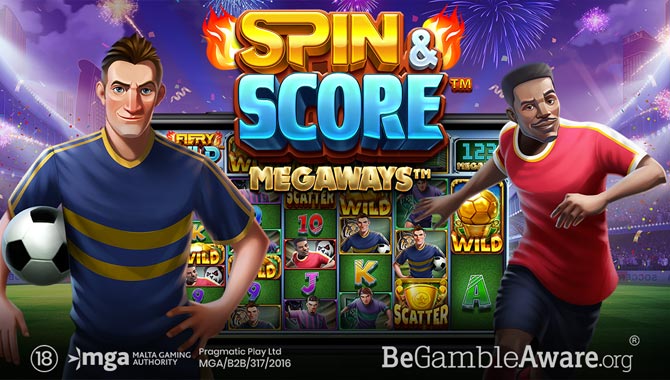 Spin & Score Megaways™ is set across six ever-changing reels with symbols depicting various football players that must form matching combinations across the slot’s up to 117,649 winning ways to award a win. A wild football aids in unlocking these wins by substituting all other symbols in the game except the scatters. Similarly, a big wild symbol can transform the two reels below the symbol into wilds.

A tumble feature also removes any winning symbols from play and replaces them with new symbols, allowing for additional wins to be made.

At least four trophy scatter symbols are required to gain access to the free spins round which awards 10 free spins. These can then be collected or gambled for the chance to be awarded additional spins. Each win gained during the round increases the overall multiplier by 1x and this feature can be retriggered by landing three scatter symbols awarding an extra four spins.

Spin & Score Megaways™ follows in the footsteps of recent hits such as Release the Kraken 2™, Sword of Ares™ and Big Bass Keeping It Reel™ which reside among a collection of over 250 titles in Pragmatic Play’s award-winning games portfolio.

Irina Cornides, Chief Operating Officer at Pragmatic Play, said: “Spin & Score Megaways™ arrives as the popularity of football is at an all-time high with international tournaments on the horizon.

“The slot offers multiple ways for players to unlock big win potential, whether that be through the big wild feature, increasing a multiplier in the free spins round, or using the Megaways™ mechanic to unlock the maximum ways possible. Offering varying ways to win across six ever changing reels, this title is ready to kick-off some great entertainment.”