Pragmatic Play serves up a treat in Sweet Powernudge™

Pragmatic Play, a leading content provider to the iGaming industry, hits the sweet spot with a new candy-inspired slot that will see the return of fan favourite feature with the release of Sweet Powernudge™. 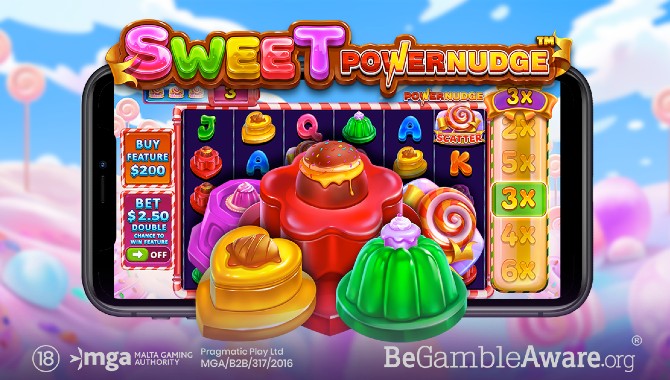 Played across 6x5 reels, symbols depict various sweets, jellies and chocolates which must form a cluster of five or more adjacent matching symbols to trigger a win. Any wins unlock the Powernudge feature where reels that contained at least one winning symbol nudge down one row revealing new symbols at the top of the board and the ability to create additional combinations of symbols.

Randomly during any base game spin, a multiplier reel positioned next to the normal reels can spin, awarding between a 1x and 10x multiplier to any wins gained. This also nudges if the normal reels trigger the Powernudge mechanic collecting additional multipliers and further increasing the winning potential present in the title.

Four or more scatters award seven free spins. Here, the multiplier reel is active during every spin and nudges down collecting additional multipliers for each Powernudge triggered on the game board. Additionally, a retrigger can also be collected with four scatters awarding three more spins.

This latest slot release follows hot on the heels of recent hits like Pizza! Pizza? Pizza™, Hot Pepper™ and Reel Banks™ which reside amongst a collection of over 250 unique titles in Pragmatic Play’s award-winning games portfolio.

Irina Cornides, Chief Operating Officer at Pragmatic Play, said: “The Powernudge mechanic is a huge favourite with slot enthusiasts, as we’ve seen with previous hit games such as Rise of Giza Powernudge™ and Goblin Heist Powernudge™.

“Building on this feature has seen the introduction of a multiplier reel, which can dramatically increase wins both in the base game and free spins round. We are also returning to a successful candy theme in this game, with the award-winning Sugar Rush™ and Sweet Bonanza™ already making use of this style. This title delivers on the features and mechanics that players look for in terms of replayability and win potential.”