Pragmatic Play, a leading content provider to the iGaming industry, has launched its latest slot, Mammoth Gold™ Megaways™ which sees mighty mammoths reigning over an icy tundra, outweighed only by the game’s big win potential. 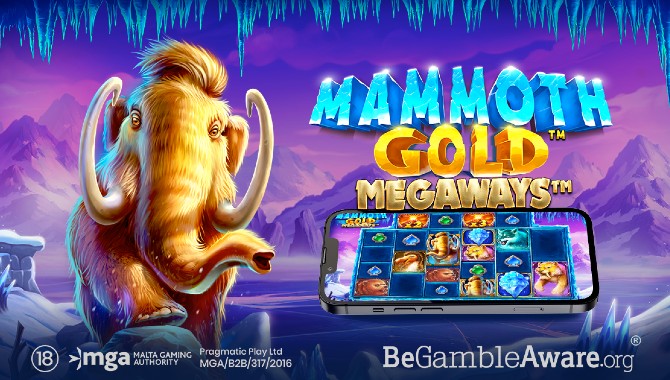 Played across six reels and making use of the innovative Megaways™ mechanic, the title depicts numerous ice age creatures such as wolves, bears, sabre tooth tigers and more, which must form a matching combination across the reels to award a win.

Winning symbols are then removed from play with a cascade of new characters filling these positions and allowing for extra wins to be created. Multiplier wilds are also present on the reels making it easier to create these wins and simultaneously increasing their value.

At least three scatter symbols are needed to award an initial bonus wheel game, where the number of free spins gained can be gambled for the opportunity to win more spins. In this round, each cascade triggered awards an incrementally increasing game multiplier of 1x.

This is dramatically increased if a win is made with a multiplier wild present on the reels as its value is multiplied by the overall bonus multiplier.

This latest slot release follows hot on the heels of recent hits like Secret City Gold™, Pinup Girls™ and Sweet Bonanza Dice™ which reside amongst a collection of over 300 unique titles in Pragmatic Play’s award-winning games portfolio.

Irina Cornides, Chief Operating Officer at Pragmatic Play, said: “Mammoth Gold™ Megaways™ offers players a huge amount of entertainment in the base game with cascades, multiplier wilds and the ever-popular Megaways™ mechanic, which work in tandem to deliver high-intensity action.

“The free spins round allows for some direct interaction with a gamble mechanic and the bonus round upgrades the features in the base game by introducing an overall game multiplier for a feature-packed gameplay packaged in a beautifully crafted slot.”