Scientific Games Corporation (NASDAQ: SGMS) ("Scientific Games" or the "Company") announced that it has renewed a contract with Fremantle for the exclusive rights to use three iconic TV game show brands in lottery games through 2022. Scientific Games will continue to create games for lotteries in the U.S. and Canada featuring THE PRICE IS RIGHT® and FAMILY FEUD® and in the U.S. featuring PRESS YOUR LUCK®. From dramas to entertainment, factual and lifestyle shows, Fremantle creates, produces and distributes some of the best known and loved content in the world. 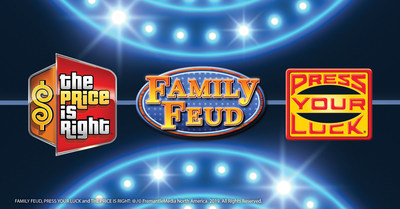 Scientific Games has created and launched more than 100 different lottery games featuring THE PRICE IS RIGHT, FAMILY FEUD and PRESS YOUR LUCK brands over the years. The Company is the world's largest provider of lottery instant games, and is the largest provider of online/mobile second-chance promotions and winners events for individual and multi-state lotteries.

"Our innovation teams are already at work creating new lottery games themed to these three Fremantle hit TV game shows," said Kyle Rogers, Executive VP of Lottery Licensing for Scientific Games. "Our goal is to offer the best portfolio of entertaining licensed properties to lotteries around the world and their players."

Originally making its TV debut in 1983 and returning to TV this summer, PRESS YOUR LUCK is a game of wits, strategy and even higher stakes as contestants try to avoid the iconic and devilish WHAMMY for a chance at life-changing cash and prizes. Network television's No. 1 rated daytime series and the longest-running game show in television history, THE PRICE IS RIGHT features a variety of games and contests all with the same basic challenge to guess the prices of everyday and not-quite-everyday retail merchandise. The No. 1 game show in syndication, FAMILY FEUD, first premiered in 1976 and has remained one of television's most popular and enduring game shows. Featuring two families who compete for cash and cars, contestants try to guess the most popular answers to questions posed to 100 people surveyed. In addition to their broadcast success, THE PRICE IS RIGHT AND FAMILY FEUD also offer touring versions. THE PRICE IS RIGHT Live™ has been touring throughout the U.S. and Canada since 2003 with more than 150 shows per year on the road. FAMILY FEUD LIVE: Celebrity Edition® just kicked off a new tour in the U.S., and Carnival Cruise Line just announced a seagoing version of FAMILY FEUD LIVE® debuting abroad the Mardi Gras ship in 2020.

In 2009 Scientific Games turned out a hit multi-state linked game themed to THE PRICE IS RIGHT. Sixteen U.S. lotteries participated, with events held in Las Vegas offering the lottery winners the opportunity to play THE PRICE IS RIGHT Live stage show for cash and prizes—and be selected to spin the iconic 'Big Wheel' with the chance to win up to $1 million.

Scientific Games provides games, technology and services to more than 150 lotteries around the globe, including nearly every North American lottery.