BBIN Leaps into eSports and Forms Alliance with MAD TEAM 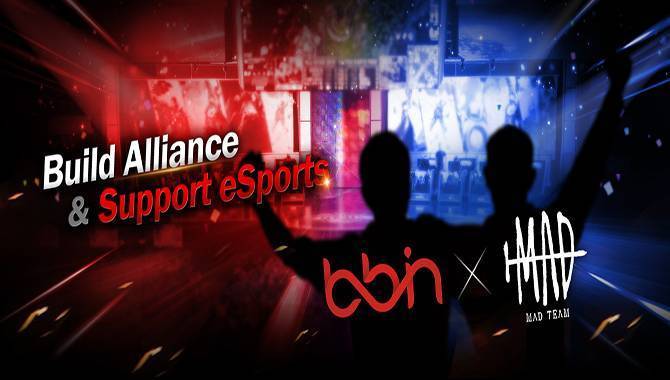 As Asia's leading iGaming software supplier, not only has BBIN been actively participating in international events in recent years,it is also working hard to support well-known global sporting competitions. In July 2019, BBIN officially formed an alliance and became partners with eSports club "MAD TEAM", providing support to MAD's Arena of Valor team. Both parties are optimistic about this cooperation. MAD TEAM stated: "BBIN has been cultivating itself in the field of competition events for a long time. We look forward to expanding resources and making efforts for better eSports through the cooperation between MAD TEAM and BBIN. "

MAD TEAM was founded by the famous actor and singer, Shawn Yue. Although the team has only been one and a half years since its formation, it has already attained several excellent achievements on the eSports stage and keeps improving. In the 2019 GCS Spring season, MAD’sArena of Valor team powerfully wiped out its opponents with a result of 4:0, successfully winning the first place for the spring season of GCS. In June, the teamhas headed to Da Nang, Vietnam to fight the battle of Arena of Valor World Cup 2019 and compete with outstanding teams from the nine major contest districts for the champion position.

BBIN is committed to developing iGaming software and system as well as providing platform integration services. Apart from participating in iconic exhibitions of the industry, BBIN has also won many major international awards. For a long time, BBIN has been supporting well-known international sporting events and engaged in charitable endeavors around the globe. Examples include the 2016-2018 Formula Championship Series, and football team Dortmund in the 2018-2019 Bundesliga. BBIN has also been giving strong support to charities recently. In 2018, through the brand TGB Charity, BBIN invited a famous DJ to work together in holding a music charity event; in June 2019, BBIN started calling on the world to support For The Next, a greening tree-planting event. These are all important international collaborations of recent years.

BBIN has opened up a new field of sponsorship in 2019. BBIN is not only crossing over to other fields to support young eSports teams, but also paying close attention to booming and fast-growing eSports events and relevant competitions around the globe. "Mad" is used by MAD TEAM to symbolize its belief and passion for eSports. Since this announcement,MAD TEAM will work closely with BBIN. We hope that the team will rise above others in the intense competition, and shine bright on the international stage.