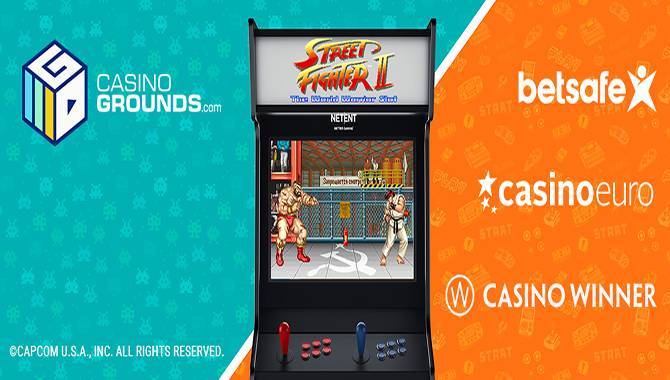 While many have been looking forward to summer, the slot enthusiasts among us have been excited about a different thing entirely... 2020's hottest release to date, NetEnt's Street Fighter II: The World Warrior Slot.

From 19 - 25 May, a collaboration between industry titans NetEnt, Betsson Group and streaming community CasinoGrounds, will bring players an exclusive competition.

Players across Betsafe, CasinoEuro and CasinoWinner can access the game before anyone else, then test how it holds up against the original classic.

On the 20th, CasinoGrounds are hosting a streaming competition between three of the biggest streamers they have, all across YouTube, Twitch and frankly anywhere it can be posted.

Boasting 5x5 reels, cluster pays, mutiple gamification features, 'Beat the Boss' Free Spins and even a hidden bonus game re-enacting scenes reminiscent of the legendary arcade game itself, fans are in for a treat.

No game out there more embodies the early days of gaming, Nintendo vs Sega, Ryu vs Ken, Blanka v Chun-Li... there is a romanticism that surrounds this game and the culture that grew sicne its inception.

A slot bursting with the energy of the original release, Street Figher II packs a serious punch. Innovative game features and in-play mechanics sserve up what will surely become a future classic.

Betsson Group have again shown a shrewd turn of foot in securing what was certainly a highly southg after exclusive. That means across all Betsson brands, before anywhere else, from May 19, players can be transpored back to the early '90s and throw some moves at Street Fighter II.

The clever ones will do this through CasinoGrounds; let's see what this collaboration of industry powerhouses can serve up for us. One thing is for certain: the wait appears to have been worth it.