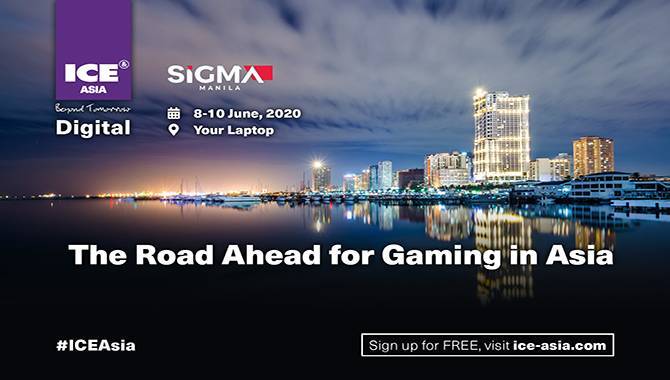 ICE Asia Digital 2020 continues to develop an impressive lineup of new speakers and topics as the event draws near. Scheduled to be held as a virtual event from Monday, 8 to Wednesday, 10 June 2020, the ICE brand’s inaugural Asia show will cover topics that the regional Asian gaming industry will face in the coming months and years post-COVID19. This includes announced sessions that cover the entire Asian gaming operators, manufacturers, policymakers and other industry experts.

Day 1of ICE Asia Digital will begin with a keynote discussion by Andrea Domingo, the Chairwoman and CEO of PAGCOR. This will be followed by a focus on the outlook of Asian regional gaming in a post COVID19 world, including discussions around the state of the markets and what regional recovery may look like in the coming months. The panel will include Alidad Tash of 2nt8 Ltd., Kevin Clayton previously of Galaxy Entertainment and Sands China and VitalyUmansky of Sanford C. Berstein.

This will be followed by a panel on the regulatory impact that COVID19 will have on the gaming sectors throughout Asia and includeJamie Nettleton of Addison, Ranjana Adhikari of Nishith Desai Associates and Lau KokKeng of Raja & Tann Singapore.

Additional topics will include a discussion around the marriage of digital and land-based gaming operations led by Jonathan Pettemerides of Rank Group and a detailed review around Australian regulations which will be led by Michael Sarquis,Executive Director of the Office of Liquor and Gaming Regulation, Department of Justice and Attorney-General.

Day 2 of the event will begin with another keynote presented by Andrea Domingo of PAGCOR. This will be followed by a panel discussion around the re-opening of casinos in Asia and what the “new normal” will look like from an operational perspective. The panel will be chaired by Jose Angel Sueiro, Chief Operating Office of PH Resorts. Following the panel discussion,Steve Wolstenholme, Acting CEO of HOIANA Casino, will give his take on the development of integrated resorts and the gaming industry at large in Vietnam.

The regional focuswillshift during the second half of Day 2 to include an update on Japan integrated resort development. Chaired by Brendan Bussman of GMA, the panel discussion will center around the timeline for casino development in Japan and be discussed by Ayako Nakayama of the Japan IR Association, KazuakiSasaki of Toyo University and Toru Mihara, Chair of the National Council on Gaming Legislation.

This panel will be followed by a focused exploration into the public consensus of Japan’s casino development by Dominic Carter of the Carter Group. The day will end with a look at Chinese consumerism and tourism by Annie Siara of 86 Connect. There are additional regional topics that will be added to the agenda in the coming days, including more content around the Macau and Korean markets.

The event concludes with a third day dedicated to Gaming training, hosted for free by the international course provider Totally Gaming Academy. This training will focus on land-based challenges, including AML & CFT, casino commercialization and social gaming for land-based operators.

Registration to ICE Asia Digitalis free of charge, including the training.