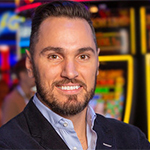 Wilson is a seasoned executive with almost two decades of experience in the gaming industry and a proven record of driving growth and creating value.

In his role as Light & Wonder’s CEO, he is responsible for leading the strategic growth plans for the gaming team while overseeing product development, production, supply chains and sales.

In terms of credentials, Wilson holds a diploma in “Coaching Skills for Leaders and Managers,” and was accredited for “Holding Your Team Accountable” and in “Unconscious Bias.” He also holds a diploma in “Advanced Management” from the Wharton Executive Education Program.

In 2022, at the Global Gaming Awards Asia, Light and Wonder received two top accolades including “Casino Supplier of the Year” and “Casino Product of the Year” for MDX, the company’s 10-Deck Shuffler.

Wilson was appointed the President and CEO of Light and Wonder in October 2022 and prior to that, he served as CEO of Gaming between March 2020 and October 2022.

He served for almost 16 years at Aristocrat as President and Managing Director Americas, where he was responsible for the Commercial Operations of Aristocrat’s Americas division. He also served as SVP of Global Gaming Operations, where he oversaw the development and execution of recurring revenue strategies. Between September 2014 and October 2015, he served as SVP of Sales and Marketing for Aristocrat, and between June 2012 and August 2014 he served as VP of Marketing Americas.

His career at Aristocrat began in January 2006 when he took on the role of Business Development Executive, and after two years, he was appointed Regional Sales Manager.

In October 2022, at the Global Gaming Expo (G2E) in Las Vegas, Light & Wonder unveiled an array of new products meant to address shifts in player behaviour.

Among the new products was the Cosmic slot cabinet, a sustainable solution for operators called The Card Recycler and a new live casino experience, Light & Wonder Live Dealer.

“I am excited to work with the best team in the business as we chart our cross-platform future. With a portfolio of unparalleled evergreen franchises, industry leading positions and unmatched platforms, combined with a strengthened balance sheet, we are well-positioned to drive substantial growth and shareholder value.” Matt Wilson