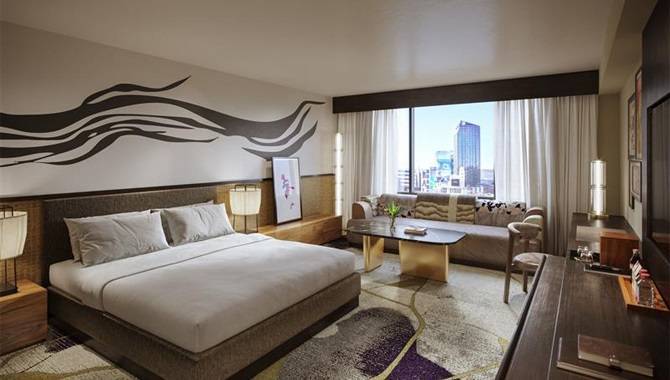 The world's first Nobu Hotel, at Caesars Palace, is receiving a revamp. By the end of 2021, 182 guest rooms and suites will be redesigned as well as its surrounding public areas.

As the hotel commemorates its eighth anniversary, the luxury boutique suites within the Las Vegas resort are gaining a multimillion-dollar refresh project, envisioned by Rockwell Group.

The casino group aims to further its longstanding partnership with Nobu Hospitality, with this project coming as one of Caesars’ several development plans.

Rockwell has envisioned a modern and residential redesign for Nobu, drawing inspiration from Kintsugi, the Japanese art of repairing broken pottery with gold epoxy; in the notion of: if something is broken, it still has the power to be beautiful when bought back together – regardless of imperfections.

"As the city continues to evolve as one of the top destinations for entertainment, sports and gaming, we are committed to investing in Las Vegas. From the Nobu Hotel refresh to the Caesars Palace main entrance renovation – Caesars is proud to offer experiences that guests can only find at our resorts."

Each guest room will include a custom sofa, embroiled with patchwork upholstery, from painterly-style prints to muted textured graphics, alongside a quartzite coffee table with a gold base; cracked in full Kintsugi effect.

The guest corridors will also feature custom carpet, with rippling forms suggesting koi fish clustering at each door and patterns inspired by Suminagashi, the art of Japanese paper marbling.
Caesars and Nobu are in the process of adding new Nobu Hotels and restaurants at Harrah’s New Orleans and Caesars Atlantic City.