PokerStars and Oracle Red Bull Racing have unveiled the next phase of their joint Formula One promotion. 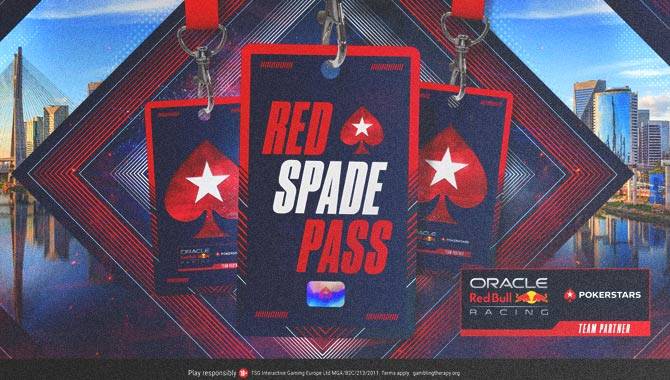 As this year’s F1 season moves into its second half, PokerStars has revealed how fans can win another Red Spade Pass.

This will be awarded at the European Poker Tour (EPT) Barcelona. By participating in PokerStars’ €3,000 ($3,088) buy-in ‘EPT Platinum Pass Mystery Bounty,’ one player will be rewarded.

A Red Spade Pass will be added to the prize pool and concealed within one of the envelopes given to players who successfully knock out another.

These so-called “Bounties” will be awarded from day two, with the event running until 19 August. PokerStars said further Red Spade Passes will be handed out, and will announce “new ways to win” soon.

Winners, meanwhile, will be granted access to a unique experience at Brazil’s Interlagos Grand Prix. This includes three days at the GP, plus flights and five night’s accommodation in Sao Paulo, as well as other activities.

All Red Spade Pass winners will also receive a personalised message from an Oracle Red Bull Racing driver, alongside merchandise and a poker coaching session, among other rewards.

“Our aim is to give our community epic moments that they will never forget,” said Rebecca McAdam Willets, PokerStars’ Director of Partnerships, Public Relations and Consumer Engagement.

“Together, PokerStars and Oracle Red Bull Racing want to bring entertainment to all of our fans and players, and this season we’ve seen some fantastic moments both on and off the track.

“As our partnership continues to grow, we’re looking forward to bringing even more unique experiences to the PokerStars communities.”