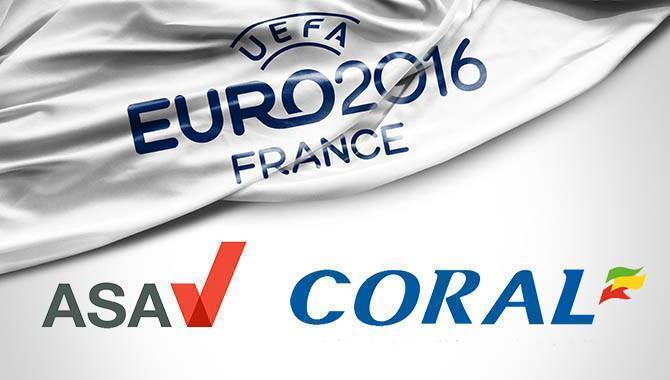 By Nicole Abbott
The Advertising Standards Agency (ASA) concluded their investigation into Coral's Euro 2016 advert, which was ruled ‘misleading’ and banned by the authoritative body.

This investigation was instigated by a customer complaint, who claimed that he was told that he was not eligible for the offer promoted by the ad because his Connect card was in-shop only, and the offer was only available to multi-channel Connect customers.

The ad itself stated: “FREE £5 BET. BET £10 ON A TOURNAMENT WINNER GET £5 EVERY TIME THEY WIN*” and “AVAILABLE TO NEW & EXISTING CONNECT CUSTOMERS IN ANY CORAL SHOP”. Small print linked by an asterisk beneath the ad stated: “Available to multi-channel Connect customers in any Coral shop”.

Coral responded by admitting that there was a mistake on the advertisement, as the offer was available to both multi-channel and in-shop only Connect customers. Coral informed the ASA that the customer was also wrongly informed by the customer service team member.

The ASA decided that the ad was misleading and self-contradictory. The ASA have refused to allow Coral to display the ad in its current form, and warned Coral that its future qualifications must clarify, as opposed to contradict, the promotion’s headline.
RELATED TAGS: Land-Based | Legal & Regulatory | Sports Betting