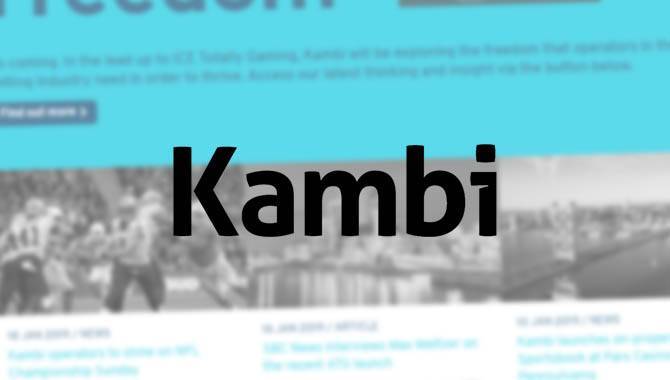 A statement from Kambi said the business had “never been in better shape,” which is illustrated by a growth in quarterly revenue after a World Cup summer. Revenue for Q2 was €17.6m.

In August, Kambi made its US debut by processing the first legal sports bet in the country outside of Nevada, and has since grown in the newly-regulated market.

CEO Kristian Nylén said: “It's been a fantastic start in the US for Kambi, which I believe reflects an enthusiasm for the high-quality sportsbook experiences we offer, which we hope to bring to players in additional states shortly. I've recently returned from a major gaming exhibition in the US where, following our early success in New Jersey, the interest in Kambi was at an unprecedented level.

“It is for this reason we plan to continue to invest in areas such as talent, technology and licensing so we can maximise the opportunity presented by the gradual state-by-state roll-out of regulated sports betting across the country.”

Kambi had previously described the difficulty of applying for and receiving a US gaming license as “onerous,” but after getting approval, Nylén said he was “pleasantly surprised” with the following application procedures.

The supplier has experienced positive gain outside of the US and CEO Nylén stresses that growth in Q3 revenue would have happened even without Q3 figures.

He said: “While the US is very much the main strategic focus, we continue to grow strongly throughout the network and across multiple markets.

“In Q3 we strengthened the network further with three European-based customers - ATG, Global Gaming and Latvijas Loto - bringing us to seven new customer signings for the year.”

In January 2019, Kambi will join the re-regulated Swedish market.

Nylén said: “With our existing business as strong as it ever has been, and Kambi establishing itself as the pre-eminent sports betting supplier in the developing US market, these are certainly exciting times for all involved with the business."

Check back in to GamblingInsider.com to read an exclusive Q & A with Nylén about the results.