The launch of Sky Sports Racing: What success will the new channel bring?

Alex Hammond will be the first face viewers will see when Sky Sports Racing goes live on 1 January 2019. The TV presenter has been working for Sky Sports News for the past 15 years, but has made the decision to switch to the new dedicated horseracing channel. 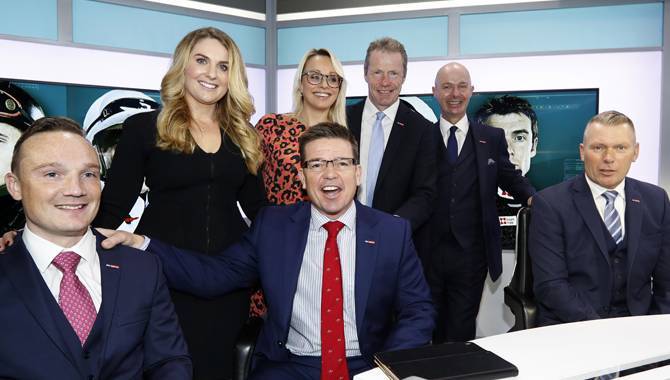 Will a big name within racing entice a new, younger audience? Only time will tell as At The Races begins its transition to Sky.

Gambling Insider was invited to Sky for its new channel's launch to be among the first to find out more about what viewers can expect to see on their screens in the near future.

A major problem horseracing has faced for a number of years now has been the lack of younger fans showing an interest for the sport.

In a world still dominated by football, this is a major challenge Sky Sports Racing will face when the channel goes live.

Despite horseracing lagging behind, Director of Content & Production Steve Smith is confident that will change with the launch of Sky Sports Racing, but thinks the issue should be approached with caution.

He said: “We have to be very mindful in terms of 25 and younger, because within Ofcom regulations, we cannot have anybody under the age of 25 both digitally and on screen when related to gambling. There has to be that separation. What we would look at is what is the right approach for different platforms, where we know that younger generations are on those platforms, such as Snapchat, Instagram and even YouTube to a certain extent.

“You are trying to create interest in the things around racing first and foremost that might engage the younger generation, rather than it is just for the racing purist. Every sport faces a similar challenge. Racing is slightly different because of the gambling element to it but we need to create content which engages that demographic on the platforms that the younger generation are currently on, so that it raises interest that then hopefully leads to a longer term engagement."

Yet despite the lack of interest all year round, Smith believes the sport involves everyone.

He said: “I feel that racing is the most inclusive sport. Whenever you go to a racecourse, you’ve got all the different social demographics that turn up to get involved in racing. I feel there is a real opportunity there, in terms of inclusivity. What are the things which are going to excite and engage? When we work on that it’s the case of looking at the data around the content we create and looking at what is and isn’t working.

“With Sky Sports, we will have the football, boxing and darts crossover which we can use to engage their audiences to horseracing.”

The transition away from At The Races has raised some eyebrows, a channel adored by its fans and one with a personal feel to it. However, Matthew Imi, ATR’s CEO, believes the move to Sky will only improve its horseracing content.

He said: “We are in a position of strength. We have a great portfolio of live horseracing content for domestic and international markets. We are one of the market-leading digital platforms in the UK and Irish markets which is continuing to grow.

"With the move to Sky, we already believe we have a distinct tone. The personality of At The Races will continue. We have a unique tone and personality and we’re not afraid to ask tough questions when interviewing.”

Tony Sweeney, Commercial Director at ATR, added: “What is important to note is that we have never promoted ATR. Everything has been organic. Everything we have done has been word of mouth or industry and now we have this amazing opportunity to promote horseracing on a larger scale.”

Although there is plenty of optimism around the new channel, it appears horseracing will not be featuring much, if at all, on the Sky Sports Main Event channel, as it remains down the pecking order in terms of popularity.

Despite this, Smith is still optimistic that racing will get its chance further down the line.

He said: “It’s a customer proposition. When we sit down and decide main events, we are factoring in what is best for our customer, what is best for returning customers and the time/date of the event. Sky Sports Racing will be exactly the same as any other channel in those considerations.”

Another issue Sky Sports Racing faces is adapting but still keeping its original audience. The introduction of HD for the first time is long overdue, which is more than likely to be well received. The use of drones and fancy camera work may lose “classic horseracing fans,” though, which has predominantly been ATR’s audience for years.

Rob Dakin, Director of Broadcasting at SSR, said: “On 31 December, the audience will be exactly the same on 1 January. We want to make sure those viewers stay with us, so it will be a challenge for us. It is something we will have to be constantly aware of. The tone of the coverage we’ve had for a while with ATR and is something we will continue to do.”

What is clear is the decision to become Sky Sports Racing creates the perfect opportunity to really showcase the sport on a much larger scale. Sky has been able to secure exclusive deals for racing in France and Hong Kong, expanding its international portfolio.

Dakin said: “We’ve got an exclusive deal with French racing, so we’ve got a minimum commitment of over 200 fixtures throughout the year and that includes presentation on course as well. We can’t replicate what we roll out in the UK, but we have a dedicated team based in France to provide us with presentations over there. We’ll continue with regular international content so we will continue in the US, Australia and Hong Kong content, which is also exclusive to us.”

It isn’t just the international racing which will help to grow Sky’s audience, as Sky Sports News will be looking to play a vital part in luring its viewers to the new racing channel.

Sky Sports News CEO Andy Cairns said: “We want to play a big part in that at Sky Sports News. We know our audience is predominately football fans, but they also like big sporting content and events. If we can tell them about the racing narratives and get those who have a casual interest in horseracing to have a more serious interest, then we have achieved what we have set out to do.

“We want our audience to be excited. Horseracing is such a fantastic sport and there have been so many great stories over the years. We’ll have racing news every morning and every evening and we’ll be able to really monster the big events.”

Smith added: “We know we have the core audience. It’s all about how we cross-promote the sport. Sky Sports News will be a huge element of that and our digital reach will also play a major role in growing the sport. Everything is about keeping our customers on our channels.”

After working with Irish racing for over a decade, Sky has been unable to extend its contract and will not be showing any Irish racing in 2019. It’s far from doom and gloom, however, as Sky has been able to add Royal Ascot and Bangor to its portfolio, which is a massive coup.

Imi said: “We had a great relationship with Irish racing. We had a 14-year relationship and we always felt it was strong, but we wish them well going forward. We’ve kind of moved on since then and our focus for many months now has been this new business and this new channel and ensuring we have populated it with a strong product. I think time will tell whether or not decisions which have been made will be good ones or bad ones. At some point, Irish racing rights will come back on the market and we might be there to have a conversation with them if they are interested and if we are interested.”

Despite the loss, Imi is confident Sky has made the right acquisitions to be a success from 1 January and Sky head into 2019 full of optimism.

He said: “With the future of Sky Sports Racing, we are taking a very long-term view. It doesn’t rely on adding any particular tracks to our portfolio. We’re very confident we can grow the business off the back of our current portfolio.

“It depends on what racing wants. We are very much focused on making Sky Sports Racing as strong as possible and I guess if other racecourses see what we can do and if they want to approach us at a particular time our door is open and we will respond.

Sky's Steve Smith is backing the new channel and believes it will more than compete with the rest of the industry.

He said: “What we are doing here at Sky is right at the edge of technology. It’s all about content, innovation and customers. By being at the edge, it allows us to push further and do more and give more to the customer and that is what we are constantly striving to do here at Sky Sports.”

A key area which will help the channel to succeed is that betting adverts will continue to run during its live events. Horseracing would be the only sport exempt from a rumoured voluntary ban on gambling adverts during live sport by members of the Remote Gambling Association.

There is no doubt this is an exciting time for Sky and for horseracing as a sport. Horseracing is being placed on the biggest platform within the industry; with a host of high-profile professional on-screen presenters and cutting-edge technology providing increased racing drama. It leaves the impression that if horseracing isn’t able to succeed under the Sky umbrella, the sport will find it very difficult to improve on its current audience in the future.