Premier League club Fulham has signed a record sponsorship with betting firm W88 as a Front of Shirt and Main Team Partner for the upcoming season. 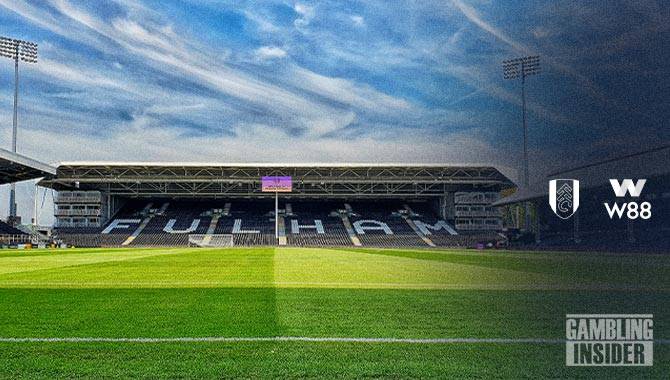 An agreement had reportedly been made between the two parties last week, but the club has now confirmed that its shirt featuring the W88 logo will be worn by both the men’s and women’s first teams.

As part of the deal, W88 will also receive visibility across the club’s stadium, Craven Cottage, on matchdays, and via the club’s digital channels.

“We are both proud and excited to be partnering with London’s oldest professional football club, Fulham FC, as they return to the top-flight of English football,” said W88 Business Development Manager Hilly Ehrlich. “We are also looking forward to engaging with their passionate global fanbase during the season ahead and delivering innovative content with the club.

“With a global footprint, W88 is a brand which represents integrity, trust and excellence and we will be actively promoting responsible gaming.”

The new kit for the 2022/23 season will be unveiled on 29 July, and will be worn by the men’s team in their final pre-season friendly fixture against Villarreal on 31 July.

Fulham FC Sales Director Jon Don-Carolis commented: “We’re pleased to welcome W88 on board as Main Team Partner this season in a record sponsorship deal for the club.

“The deal provides significant revenue to assist with our commercial objectives, enabling us to compete in a challenging and exciting Premier League campaign.”

The partnership comes amid much debate on the issue of gambling sponsorship in football, a topic that is currently being discussed in the Government’s review of the Gambling Act 2005.

Fulham fans in particular have voiced their concerns, with the latest Fulham Supporters’ Trust annual survey finding that 46% of respondents said they would be uncomfortable having a gambling firm as the club’s main sponsor.

A similar feeling was shared among many Everton fans when it announced a club-record main partner agreement with Stake.com last month.