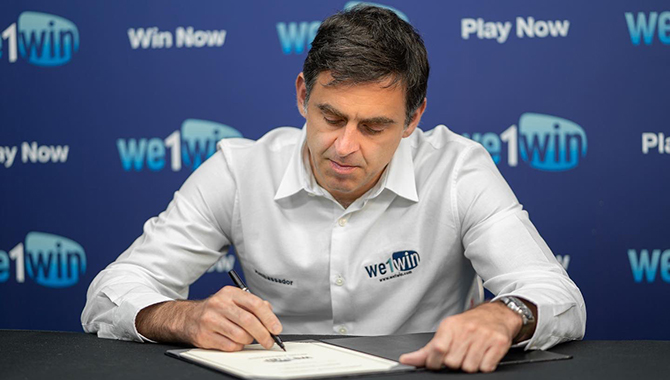 The seven-times World Snooker Champion confirmed the partnership on Twitter, saying he was delighted to sign with the company, adding the words ‘Stay tuned!’

He posted a photograph of himself signing the contract with We1Win, which describes itself as the ‘biggest online entertainment platform in Southeast Asia.’

The group noted that the Brand Ambassador agreement between the two parties is for the year 2022/2023.

O’Sullivan adds We1Win to his list of partnerships, with the snooker player already a Brand Ambassador for ROKiT, Eurosport and BCE Riley.

And earlier this year, global sports betting and casino provider Delasport signed O’Sullivan as its new Brand Ambassador, with the snooker player featuring in an integrated campaign across online and offline media, as well as wearing the group’s sponsorship patch in major tournaments.

The current world champion and world number one celebrated his 47th birthday earlier this week. And last week at the 2022 Scottish Open, O’Sullivan scored a century in three minutes and 34 seconds, just three seconds slower than the fastest televised century break, made by Tony Drago in 1996.

The 47-year-old has won a record seven Masters and a record seven UK Championship titles for a total of 21 Triple Crown titles, more than any other player. He also holds the record for the most ranking titles with 39.