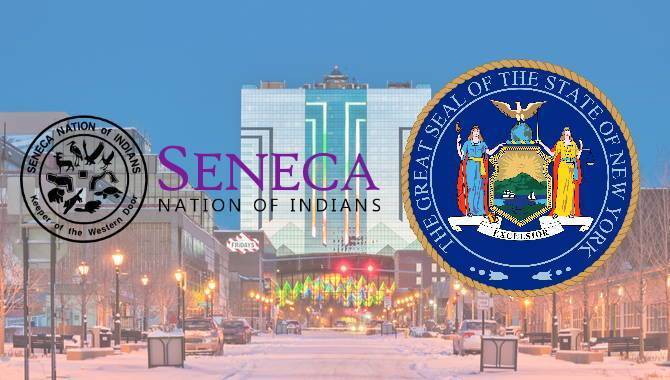 By Robert Simmons
The dispute over gaming revenue payments payable by the Seneca Nation of Indians and New York state has entered its third month, with a resolution nowhere near in sight.

State authorities are demanding the payment of $28m, as part of a quarterly payment arrangement between the tribe and the state, adding up to about $110m per year.

The Seneca Nation operates three casinos in the state: Seneca Niagara Casino & Hotel in Niagara Falls, the Seneca Allegany Casino in Salamanca and the Seneca Buffalo Creek Casino in Buffalo. All three casinos are required to make quarterly contributions under a 2002 compact agreement with the state.

Payments made by the Seneca nation go directly to the state, which then sends a portion to the cities of Niagara Falls, Salamanca and Buffalo. The tribe have paid over $1.5bn in payments since signing the agreement in 2002.

However the tribe are contending that the agreement only covers a 14 year period which they say ended in 2016, something which New York state officials are disputing.

At the start of the dispute in March, Seneca President Todd Gates told The Buffalo News: "The Seneca Nation has followed the terms of our gaming compact since 2002 and we will continue to do so until it expires in 2023. As written in the compact, the Nation provided a share of our revenue to the state through the end of last year’’

State officials dispute these claims, citing the original compact and a 2013 memorandum of understanding signed by the New York state governor’s office and the tribe as evidence of the continuance of this payment arrangement beyond the 14 year period stated by Seneca nation officials.

"If the new leadership of the nation has questions, or a different interpretation of this, they haven't shared them with us, but we're willing to meet and discuss any issues."

No such meeting has taken place between the two disputing parties, however "discussions are ongoing", according to an email from Lee Park, spokesman for the New York State Gaming Commission.

"The State has made its position clear that payments must continue. Nothing more we can add at this time."

Seneca officials have clashed with the state of New York over payments once before in 2009, when the tribe halted payments for a four year period following the states authorisation of video gaming machines at state racetracks, including one located within ‘exclusive’ Seneca territory.

The dispute was only ended after the tribe signed the aforementioned “memorandum of understanding” with New York state Governor Cuomo in 2013.
RELATED TAGS: Land-Based | Casino | Legal & Regulatory
DISCUSS THIS ARTICLE