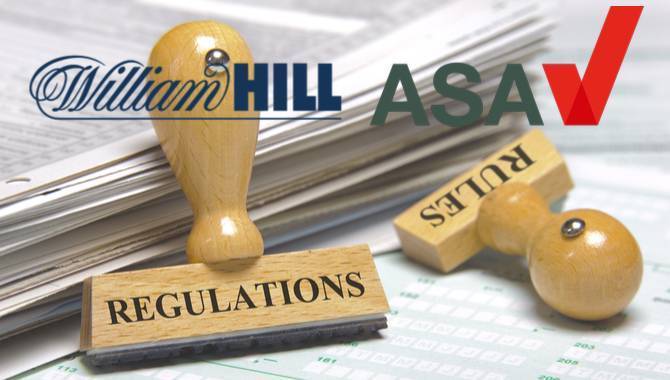 William Hill has been hit with its second regulatory issue in two weeks following a ruling by the Advertising Standards Authority (ASA) concerning one of its television adverts.

The advert, first aired in September 2017, featured a voice-over that stated: “Get a 15% free bet bonus on your winnings with ‘2 Clear’ from William Hill, 30% of flat races last season were won by two lengths or more.

“Bet on any live ITV flat race and if your horse wins by 2 lengths or more you’ll get a 15% free bet bonus on your winnings. Introducing ‘2 Clear’ from William Hill. Available on all live ITV flat races. Online, on mobile and in our shops.”

At the same time, the words “free bet bonus” and “Live ITV Flat Races” flashed on screen when referenced in the voice-over, while at the bottom of the screen, small text stated “Selected UK flat races. 6+ runners ….”

The complain received by the ASA challenged whether the condition that the promotion applied to horse races which had at least six runners was made sufficiently clear in the advertisement.

In its defence, William Hill said they had reviewed the promotion and considered consumers would have been well informed of the requirements and the key terms of the promotion which were clearly highlighted in the advertisement, allowing consumers to make an informed choice about whether to proceed with the offer.

However, the ASA considered that consumers would likely interpret the voice over claims: “Bet on any live ITV flat race” and “Introducing ‘2 Clear’ from William Hill available on all live ITV flat races” to mean they could get the free bet bonus when they bet on any televised flat race due to the language being used.

The ASA stated: “We considered that this was a significant qualification that should have been prominently included in the main body of the ad and that it was not sufficiently clear for it to be presented in the small text at the bottom of the screen.”

Upholding the complaint, the ASA have ruled that the advertisement cannot appear again in its current form and must be removed by William Hill immediately.