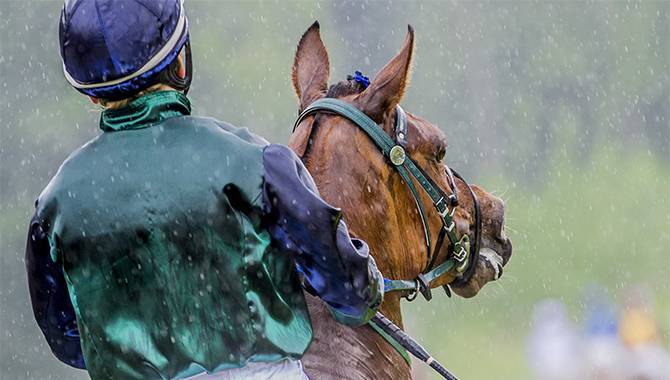 The severe weather conditions were not what horseracing goers were hoping for mid-June and neither were UK operators.

Horseracing meetings at Chepstow and Newton Abbot have been abandoned on Friday, adding to a growing list this week which includes meetings at Kempton, Haydock and Uttoxeter.

Worcester has also been cancelled on Saturday due to the River Severn’s banks bursting. Hexham is the only jumps meeting left on Saturday, but its hopes of getting the racing on remain in the balance.

Leicester is also facing an inspection on Friday afternoon ahead of its meeting on Saturday.

The vast majority of flat racing has been able to go ahead, with the majority of racetracks announcing the ground is heavy due to the amount of rain.

But it’s not just horseracing which has failed to get going, as four Cricket World Cup matches have been postponed due to the weather – a record high.

The tournament is only two weeks young and more games are expected to be called off with poor weather conditions set to continue into next week.

This isn’t the first time horseracing has been affected this year, as meetings were abandoned in February after an outbreak of equine flu, with three horses testing positive.

In March, a horseracing boycott over reduced prize money took place. No meetings were abandoned but several races saw just two horses competing at both Lingfield and Fontwell.

Gambling Insider reached out to the Racing Post for comment and Digital Director Cian Nugent said: "Any racing that gets cancelled is bad news for racing fans and business alike.

"There is obviously some impact on operator turnover but it is minimal enough compared to the blanket cancellations we've seen in the past.

"Luckily it is not like the equine flu from earlier this year when entire days of UK racing were wiped out; there is still plenty of good-quality racing taking place in the UK and Ireland."