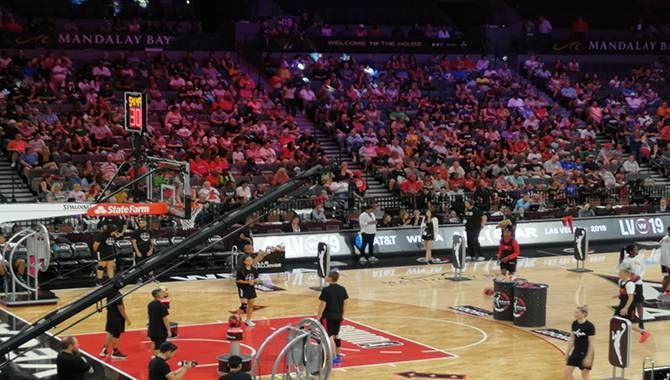 The Las Vegas transformation: MGM, the WNBA and a sporting capital

I’ve been to a fair few sporting events over the years, most of them boasting a lively atmosphere. As a Liverpool fan, I’ve been to Anfield and sang You’ll Never Walk Alone (although my friends refuse to believe me on this one). As an England football supporter, I’ve been to Wembley for both competitive and friendly matches. In tennis, I’ve also attended Wimbledon and the ATP Tour Finals, which can produce memorable moments where crowd involvement is concerned.

But nothing I’ve ever been to really prepared me for the WNBA All-Stars this August at the Mandalay Bay Events Center in Las Vegas. From the Skills Challenge beforehand all the way through to the main event, there was atmosphere, spectator engagement and an unforgettable overall spectacle, even for a non-basketball supporter like myself (I don’t watch the NBA or WNBA normally).

As Las Vegas Aces star A’ja Wilson told Gambling Insider courtside at Mandalay Bay: "It’s crazy to think about it: our culture’s changing because of Las Vegas. It’s setting the standard for future All-Star events. Everyone else has to catch up."

Team Wilson came out victorious at the All-Stars, eventually winning by 129 points to 126, despite losing three of four quarters. The occasion was about so much more than the result however, with the likes of Kobe Bryant and Megan Rapinoe in attendance, while Blue Man Group, Cirque Du Soleil and Kristin Chenoweth performed for the crowd.

With only one rendition of the All-Star event to its name, Las Vegas has already set a bar it will be difficult for anyone else to surpass. Las Vegas Aces Head Coach Bill Laimbeer explained to Gambling Insider: "It’s a great place; the players love it. Our fan base is having a great time. I think this is an eye opener for everybody, how well this has been done. I expect it will come back."

I’m often given stick by colleagues for thinking I’m taller than I am. But I was under no illusions speaking to Laimbeer (6ft 11in) as I looked up to the skies. Despite Laimbeer’s gigantic presence though, another man takes credit for creating so much of the uplift Las Vegas’ sports scene has enjoyed. For those wondering up until this point where the gaming industry fits in here, enter MGM Resorts International Chairman and CEO Jim Murren.

"MGM’s been phenomenal. Everything we need, we get from them. Jim especially, he loves the product and he’s all about diversity. He’s all about the women’s team," Laimbeer said, with Wilson adding: "Jim? I feel like I’m his best friend – and that’s what it’s all about. Without Jim, there’s no us."

The praise isn’t restricted to members of Murren’s own team, either. NBA Commissioner Adam Silver has worked closely with the CEO and is eager for that relationship to continue.

He told Gambling Insider: "Jim is a world-class CEO who knows how to entertain and engage sports fans better than anyone. We’ve seen it with our growing NBA Summer League, the thriving Las Vegas Aces and the WNBA All-Star festivities.

"He’s also an industry leader who’s not afraid to embrace new ideas and we look forward to expanding our partnership with MGM to create even more memorable experiences for basketball fans."

Las Vegas’ sporting prowess to date is far from restricted to basketball, of course, with the Vegas Golden Knights making a big impression in the NHL, the Las Vegas Lights hoping to join MLS and the Las Vegas Raiders slated to enter the NFL in 2020.

For Murren himself, continuing this success and "amplifying the fan experience" are two of his biggest priorities.

"I think we’re already gaining respectability as a sports capital, from having a hockey team that went to the Stanley Cup Finals in its first year to an NFL team starting next year with the Raiders," the MGM Chairman and CEO commented courtside.

"We host a tremendous number of collegiate championships. We’ve hosted European football; I think we’ll do quite a few more of those friendlies. We’ve always been the boxing and UFC capital of the world.

"The fact we have 80,000 hotel rooms on the Las Vegas Strip, with an airport a stone’s throw away from those resorts and so much to do when people come for an event, we really amplify the fan experience here more than any other city."

Throughout my dealings with Murren, the impression I got was equality is not just a tick-box for MGM. That’s not something I can hand-on-heart say of all gambling companies.

He said: "The team is of utmost importance to MGM. Not only are we building up sports in Las Vegas, we’re empowering women. To elevate the understanding this is a relevant place and the need to accelerate the excellence of women, I think that’s critical.

"Diversity is long overdue. Progress has been made but it’s certainly a work in progress. Anything we can do to help build up the brands of women in sports and in business, to improve the gap of inequality that exists by gender, is something MGM is very focused on.

"I’m immensely proud. I’m honoured, proud and excited. We sold out for the All-Stars. We’re really helping elevate the visibility of this sport, for people who really deserve it. These are elite athletes."

"We would always host the All-Stars. Our door is always open," Murren beamed to Gambling Insider. "It’s taking a break for the Olympics next year; potentially in 2021, we are willing and very able. We can only make it bigger."

So the next time you think of Las Vegas, there’s a significant chance it won’t be for the same reasons you did 10 years ago. Sure there are casinos – world-class ones all around the city, at that. But it’s what else Las Vegas now provides that really makes the difference in today’s market, even for casino resort operators themselves.

Entertainment, conferences, shopping, food and beverage and many other segments are becoming ever-more crucial. Most of all however, it’s the sport Las Vegas has to offer that’s truly standing out like never before.