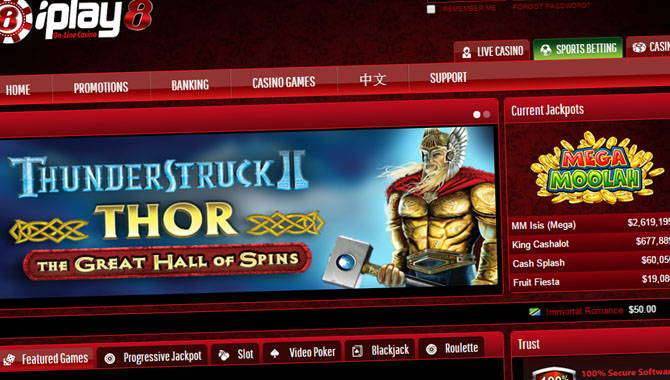 For a continent with a population of over a billion people, Africa’s gambling sector fails to pull its weight by comparison with other regions of the world and accounts for less than 2% of global interactive gambling revenues. But there have been pockets of development in different African markets over the last few years that suggest new opportunities are on the horizon. As elsewhere, however, when governments and gambling regulation are involved the path of progress is not always a smooth one.

At first, progress appeared to be being made. In September 2007 the National Gambling Amendment Bill, which was to licence and regulate remote gambling, was approved by the Trade and Industry Committee of the National Assembly. Operators were lining up to take licences but the process then got mired in political delays and the bill never became law.

A new attempt was made in 2014 with the Remote Gambling Bill but that also looks unlikely to become law. The frustrating part is that South Africa already issues internet sports-betting licences through the Western Cape Gambling and Racing Board. But internet gaming – casino and poker – continues to be a stumbling block and the lack of new gambling regulation does seem to be costing South Africa investment and jobs.

In September 2014 Playtech announced that the South African market would be a key market for the company’s expansion in Africa. Playtech had already signed a joint venture deal with casino operator Peermont Group, but until changes are made to the country’s gambling laws, Playtech cannot really do too much. “Should the regulatory landscape change we are confident that Playtech is well-positioned to do well across Africa, but with a strong focus on South Africa,” Playtech’s chief executive Mor Weizer said at the time.

Tanzania
From a regulatory point of view, other African markets have been quicker to adopt internet gaming than South Africa. In Tanzania, for example, internet gambling has been legal since December 1999, by way of an amendment to the Gaming Act, although only fixed-odds wagering, sports betting, simulated games and lotteries were allowed.

In the first quarter of 2011 the Gaming Board of Tanzania said it was in the preliminary stages of drafting new legislation for online gambling which would allow online casino games. In late 2013 the first online casino and games operator Dunia was approved by the Tanzanian government. Dunia Investments Limited, operating under the brand iplay8casino.com, chose Microgaming’s Quickfire as a games package and launched the website in October 2013.

It is interesting to note that the two language options for the Tanzanian-licensed Iplay8 website are English and Chinese – a sign that much of Africa’s economic development is being spurred by investment from China, which brings with it large numbers of Chinese workers with some wages to spend.

For sports betting, M-Bet and MeridianBet.co.tz are both licensed by the Gaming Board of Tanzania. The latter is owned by Gaming Africa (T) Ltd, which also has retail betting operations in the country. Both sites lead heavily on football betting, which is an indication of what local customers wish to bet on.

East Africa: Kenya, Uganda, Rwanda
Tanzania is part of a cluster of east African countries that have internet gambling regulation in place, a cluster which comprises Kenya, Uganda and Rwanda.

Elite Bet is one operator that is present in both Kenya and Uganda, holding licences with the Betting Control and Licensing Board of Kenya (BCLB) and Uganda National Lotteries Board. It focuses on football betting and seeks to overcome the low internet usage and payment issues by running its service through mobile phones. Customers can place bets via SMS, while deposits are made by sending cash via mobile micro-financing service M-Pesa.

Kenya started the process of internet gaming legalisation in 2011 when it entered into an agreement with Amaya Gaming Group to run a pilot for online gaming. The online casino BetKenya.com, the centrepiece of Amaya’s agreement with the regulator, was launched in October 2011, becoming the first legal gaming site in Kenya. But the high hopes for Bet Kenya were short-lived. It became increasingly difficult to access the website during 2012 and the domain no longer seems to exist. Amaya reported in its filings that “the revenue decrease in Africa for the year ended December 31 2012 is primarily attributable to a shift away from Africa to more profitable markets in North America, Europe, and the Caribbean.”

Nigeria
Nigeria, with a population of over 175 million people, has a very competitive and well-developed online betting and gaming market, centred around Lagos state (population 21 million). Most betting operators’ offerings are focused on football and virtual betting.

In Lagos state it is a requirement to run retail betting alongside internet betting. This operational setup actually works well because it helps overcome one of the main issues of internet gambling in Africa: payment of funds. Having betting shops enables internet customers to deposit funds and collect winnings in cash. 1960Bet also offers a feature that allows a customer to create a bet slip online, generate a quick bet slip code and then take that code to a cashier in the betting shop to place the bet. 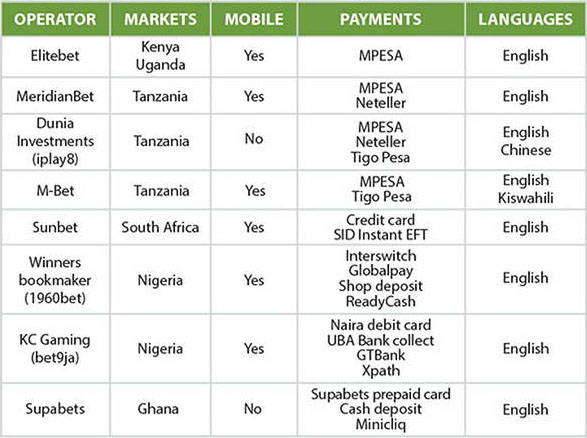 Establishing e-gaming in Africa
Several of the regulatory and operational developments outlined above have come about in the last five years, in step with developments in general economic growth, mobile technology and mobile payment services. The ongoing growth and success of interactive gambling in African markets will depend upon the following factors:

Stability – it is clearly preferable to build up a business in a region that enjoys political and social stability. The threat of political upheaval, social unrest or even outright war will discourage the private sector from investing in a market.

Economic prosperity – as the benefits of economic prosperity permeate through society, more people become “consumers” with disposable income to spend on non-essential items, such as gambling. This process, however, does take time and at present the newly created wealth is concentrated among the emerging elite in Africa.

A growing, young population – the demographics of Africa are ideal for a burgeoning gambling sector. Africa’s population is a young one and this is good both for the general interest in gambling as well as for the adoption of internet and mobile phone technology.

Urbanisation – associated with the growing, young population is the move to urbanisation in Africa. Increased population density makes it easier to target large numbers of people more efficiently. Urban areas tend to be better equipped with mains electricity, internet access and mobile phone coverage, so the process of urbanisation is beneficial for a more developed gambling sector.

There is clearly a well-established interest in football, betting and gambling in different African markets. But as Daniel Kustelski, sports betting general manager for Sun International (SunBet), has cautioned: “Expanding into Africa isn’t a cheap decision. You have to do your homework and do the exploration and investigation into the country. East Africa is an easier launching pad than west Africa as most of east Africa is English speaking.”

Lorien is a director of specialist gambling consultancy Global Betting and Gaming Consultants (GBGC), based in the Isle of Man. He is the editor of GBGC’s Global Gambling Report, which is currently in its 10th edition.