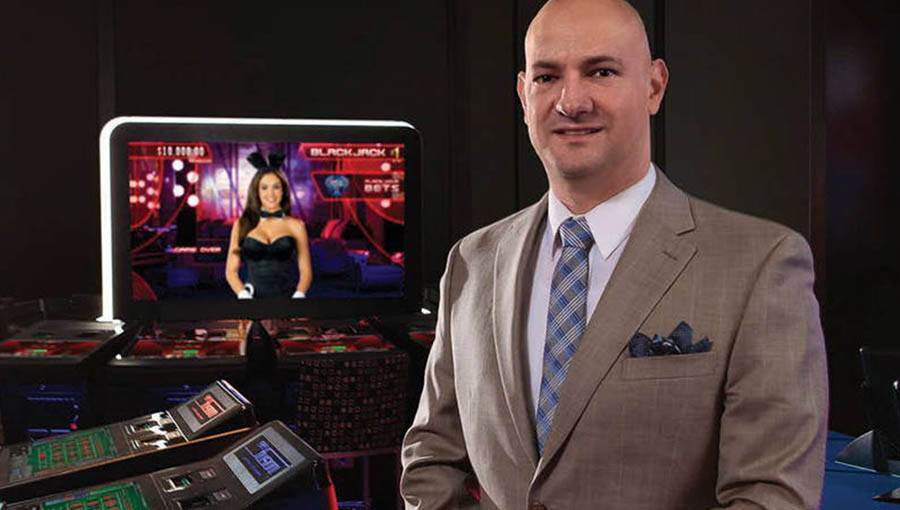 Scientific Games has blazed a trail of innovation in recent years and was rewarded by being named Land-Based Supplier of the Year at Gambling Insider’s Global Gaming Awards 2015. That pipeline shows no signs of slowing down as CEO Gavin Isaacs encourages his team to constantly reinvent gaming to make it even more entertaining and immersive for players. The firm has wowed operators with its cutting-edge releases at recent trade shows, and it believes there has never been a better time to be a player due to the wide range of games on offer.

Gabe Baron, who runs Scientific Games’ electronic table division, has shown off a range of new products, from a new stadium blackjack format to a novel Playboy-themed table game, and he is excited about the direction the industry is heading in.

Baron’s team brought in a range of Playmates of the Year and looped films of the scantily-clad ladies in green screen settings to produce scenarios where it looks as though they are dealing cards. When you play the game, it looks as if the bunnies are dealing to players.

“In this game everybody makes a dollar bet and any time the dealer has a coloured pair as their first blackjack cards it triggers a bonus round, and then everybody with that dollar goes to a bonus round.”

Players that have busted their hand are likely to lose interest and look around for a cocktail waitress or wander off to find their friends, but the new game is designed to hold players’ interest until the virtual dealer’s hand is revealed. If it is a coloured pair, once the dealer has finished the game, a bonus round begins.

“In the bonus round you get to choose one of the several Playboy Playmates that we filmed for a short loop,” says Baron. “They pop up, you choose your favourite and she becomes a ‘mystery multiplier’.” Players are then presented with a pyramid and they try to forge a route to the top of the pyramid by selecting the correct upwards arrow.

“The higher you climb the larger your prize can be,” says Baron. “At the end of that, multiply it by the ‘mystery multiplier’ you have chosen and you win a prize.”

He adds: “We are very excited about it. Playboy is a fantastic partner. Its mark is very well-known globally, and who doesn’t love the Playboy Playmates? Having well-known, famous young ladies dealing cards to players is already a win-win situation.

Add this additional bonus round, that is new to the realm of electronic tables, and we really think this is a big deal and we are going to build off of this as we go forwards.

“Playing off of this, we are certainly interested in continuing the idea of branding electronic table games in some fashion. If we see Playboy perform well enough on our blackjack game, there are other table games out there that are ripe for branding and a bonus round too. The sky is the limit. When you get something like this, if people take to it the way we expect, there’s a lot of innovation that can come behind it.”

Something else that has impressed customers is a product Scientific Games calls fusion hybrid, according to Baron. He says: “It’s our terminal-based games that connect to live results. So imagine right now – just as our competition does – you have terminals that can take results from a live or a podium baccarat or roulette game and we have those titles already available on fusion hybrid.

“But our version of stadium blackjack lets everybody who plays the hand start out with the same starting hand at blackjack, but depending on whether you hit or stand, and the decisions you make, the outcome of the game varies, because the dealer only takes their up-card, kind of like the Aussie or European style of blackjack.

“But say you stand while I hit, the next card that she pulls from the shoe, it gives a sign to the dealer because you stood, but to my hand because I hit, and therefore as players make their decisions and eventually stand or hit or bust, the cards end up to the dealer at different times for different hands, so you are looking at varied outcomes all from one set of cards being dealt to all players.

“Our customers, especially the North American market, envision the game as the next level of low-limit blackjack play – many players with a single dealer, increasing the efficiencies of their staffing, but also bringing a community atmosphere to the players to bring more excitement and shared moments to the casino floor. But there’s one other good point in this: we at Scientific Games are in a unique position in that we are the market leader globally in our table game content, so we leverage a lot of that on our electronic table side. Stadium blackjack, for instance, allows us to place multiple blackjack side bets that we offer our players, and the players can really choose which one they want to play.

“They are not forced to play the only bet that’s on the screen, or if they don’t like it not play it at all. Now they have three choices and in the future you can see it becoming more and more. And of course we would love to see players bet more than one of them. The more they wager upon the more excitement they experience, and of course the better the casino does because these bets are where the best house advantage lies for their needs.”

Baron enjoys working for a company that places innovation at the heart of its business strategy. “Our CEO Gavin Isaacs repeatedly says that if regulations allow you to innovate you should innovate. For us in electronic tables that’s music to our ears, because electronic tables are pretty much built around staff-less games like blackjack and roulette and craps and baccarat, and so if you are permitted to find ways to bring more excitement and new ways of presenting these classic games to the market, it’s a Pandora’s box of where you can go from here.

“We are always thinking about content and titles for tomorrow, but also what’s going to be hot for next quarter, next year, three years from now, five years from now. A company like Scientific Games just allows you to do these kind of things, knowing you have got players that are going to be hungry for something new every time you put a title out.”

When asked what key trend will shape the gaming industry in the near future, Baron pointed to community gaming, which is already big business in Asia and Australia and is gaining traction in North America. “We are pretty involved with that in Asia and Australia, and so are a couple of our competitors, and it does really well for everybody in that area. I think it’s picked up a bit in Europe as well, and I know it’s picking up in Quebec and some pockets of Canada.

“But in the States it’s actually a bit behind the rest of the world in that regard, and for this market I see that being the future – more community-style gaming, players sharing experiences, casinos building areas that are more party-centric, more entertainment- centric, where gambling is just a part of the experience rather than the main reason you are sitting there. Las Vegas has already taken that on as a city proper, but I think each casino can pick up on this and you are going to see more and more of this total experience for the player. It’s a win for everybody.

“The casinos build the excitement, and the players can all come together, friends and family, and all sit near each other and all get involved. Rather than how it used to be 10 to 20 years ago where you grab your drink, sit down at a slot machine and you see your wife half an hour later.

“I think North America is behind in community gaming partially because it was driven originally by baccarat and roulette and North America is really a blackjack first kind of place. But that doesn’t mean things aren’t evolving.

“With our stadium blackjack and a lot of the different ways you can play baccarat on the market now, I think more and more people are gravitating to these areas. One thing our fusion hybrid product allows you to do is bet on multiple games at the same time. So imagine you make your bets on roulette, you hit a re-bet button and it brings up all the wagers you always choose, you can flip right over to your stadium blackjack game, make another bet on banker or a player on a baccarat game. You can really bounce back and forth.

“For North American players, there’s always this constant need for input and excitement, and something to keep them busy, if you will. While we’ve been a bit behind, I think this is something that will drive it forward.”