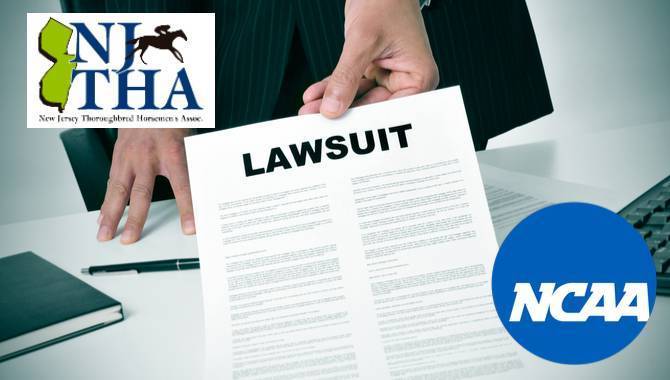 Fresh from its victory in the Supreme Court last week, representatives from the New Jersey Thoroughbred Horsemen’s Association (NJTHA) have filed a lawsuit against the National Collegiate Athletic Association (NCAA), claiming it cost the states racetracks almost $150m  in revenue by blocking the legalisation of sports betting.

In its lawsuit the NJTHA claims that the leagues acted ‘in bad faith’ by seeking a restraining order to block New Jersey’s Monmouth Park Racetrack from offering sports betting in 2014.

It alleges that the NCAA acted inappropriately in seeking a permanent injunction to bar the racetrack from offering sports betting, especially since the professional leagues were actively endorsing and promoting daily fantasy sports businesses at the same time. The injunction against Monmouth was granted in November 2014.

The NJTHA lawsuit claims that if it had been allowed to offer sports betting from November 2014 onwards, it would have made over $139m in revenue which was lost as a result of the ban.

New Jersey’s former governor Chris Christie signed a statute permitting sports betting at the state’s casinos and racetracks in 2014, only for that statute to be questioned legally in an action which culminated in a Philadelphia-based 3rd US Circuit Court of Appeals ruling that the statute violated PASPA in August 2016.

As one of the plaintiffs in the resulting Supreme Court case, the NJTHA has been invested in getting PASPA repealed since the very beginning and now fresh from its victory, the NJTHA is undoubtedly turning the screw on its former opponent.

The lawsuit also states that “During the intervening years the Leagues' actions nearly put Monmouth Park out of business, inflicted significant financial and emotional hardship on hundreds of innocent Monmouth Park workers, and jeopardized the continued viability of New Jersey's entire equine industry.”

Its suit also asks for payment of a $3.4m bond secured by the NCAA and professional leagues to cover any losses incurred while the ban was in effect as well as other damages which have yet to be determined.

No comment has been made by the NCAA or any of the other professional sporting associations regarding the lawsuit at this time.