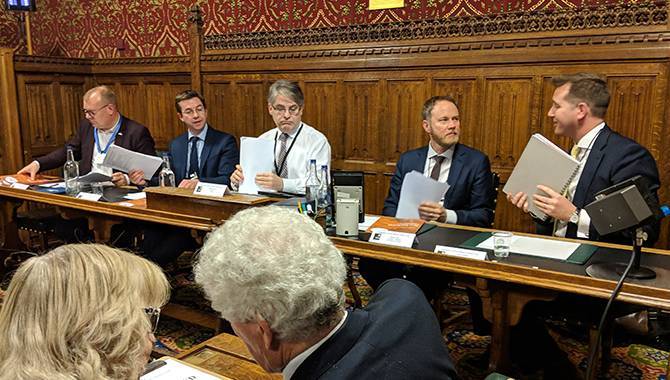 Parliamentary seminar: Teach children about gambling at school and home

The All-Party Betting & Gaming Group hosted a seminar in Parliament on Tuesday evening, asking a panel of experts if children are really gambling, and if they are, what needs to be done about it.

Each speaker was given ten minutes to answer the questions.

BH: If I’m trying to think about what children are doing, it’s quite interesting to look at what other people have found. Ofcom showed  83% of children own a smartphone and are spending 21 hours online; 77% of children play games 12 hours a week. If we move outside, Sport England tells me 40% of children do an average of more than 60 minutes of exercise per week. So if we then start to zero in on our area, we see our data tells us over the last week 12% of children claim to have drunk alcohol, 4% have smoked, and 2% have taken illegal drugs. Now a headline figure for gambling, those young people aged between 11 and 15 who claimed to have gambled with their own money in the last week is 14%. That’s comparatively low, even given the slight increase of 2% last year. Back in 2011, the figure was 23%.

Now I think most people in this room will appreciate things are slightly more complex than just the headline figure for gambling. It’s a mix of legal and illegal activity, and I think we also need to bear in mind the wider context of those activities which have gambling style elements to them. I’d like to go down further. We see the most prevalent activity is that of private bets with friends, playing cards, that’s 7%. A further 5% claim to play the national lottery and 4% on scratchcards. Though I would point out nearly half of that is legal; 3% play machines, both legal and illegal. Another 3% claim to have played online, gambling style games. Those will probably be free and not involve a cash prize, but nonetheless have some gambling attributes. Then, 2% play other lotteries and 1% claim to have used their own money online to gamble.

DW: Now these facts are not to lessen our concern about youth gambling, but getting a grip on the facts available to us is critical if we’re to address those concerns. Every student will tell you to properly treat a problem we need to accurately diagnose it and align that to an accurate dosage. If we get that wrong, if we fail to interrogate some of the data and narrative that has found a home in the mainstream, and if we swallow well intentioned but perhaps wrongly used data, we will misdiagnose. We will get our dosage wrong, and perhaps, most importantly, those who need help will ultimately suffer. Conflating problem gambling with addiction is easy to do, it’s also irresponsible. The responsibility for challenging the misuse of data lies far more widely than the industry who will always be accused of being out for a token.

So on diagnosing and dosing, we can point to the Advertising Standards Authority review at the start of February as a depressing case study in how polarised things have become. Fairly entrenched elements of the media led with the interpretation that children are exposed to a quarter more gambling ads than a decade ago. Others preferred to listen to the Chief Executive of the ASA, who highlighted exposure of children and young people to gambling ads is decreasing. What are we left with? Confusion? Yes. Impatience? Yes, and ultimately quite a muddled picture, where we run the risk of eclipsing an important opportunity for the industry to sharpen its act and practices, and in doing so accelerate the process of regaining trust and balancing this debate. On this, the betting and gaming industry must shoulder its fair share of the blame and the binary and polarised climate we often find ourselves in. As an industry, we have been far too slow to cotton on to social concerns and public trends and meet them head on with intelligent and reasonable solutions. We are in danger of reducing everything to a permit or prohibit position, and that’s not where we want to be.

RF: Waking up to negative headlines is something executives in the gaming sector have regrettably become used to in recent years and the headlines of 21 November were particularly troubling. The number of problem gamblers quadrupled in two years, said the BBC. Half a million children gamble every week, said the Telegraph. The Daily Mail reported there is a child gambling epidemic with worrying figures, reading that 55,000 under-17s have a problem with another 70,000 at risk as experts blame exposure from TV adverts. That was a publication with which the Gambling Commission chose to provide an exclusive advance copy of their report on children in gambling.

Running an online gambling company for 15 years, and choosing like I do, to be available on social media, means I get a lot of data on the reality of the industry. In our data, I do become aware of people who have experienced harm from online gambling. This may include problem gambling, and in the more serious cases, people who have become addicted. I personally have met people who have been negatively affected by gambling, but have subsequently turned their lives around through treatment. I strongly believe children need education on the risks of gambling.

LW: I want to give a practical answer to the questions and share a bit of insight YGam has gained in the past five years. Our social purpose as a charity is to inform, educate and safeguard young people. We have two education products, the first we call Preventative Education Workshops. For those we invite practitioners, sometimes to the Hippodrome Casino, and we run an eight-hour Pearson certified workshop. Those adults then have access to all YGam materials and can deliver a programme around preventative education in this space to young people under their car

The programme itself has 120 lessons so it’s quite a practical activity. Those lessons are framed around six areas of our curriculum. Those are why people gamble; probability and luck; the gambling industry; money and debt; addiction and mental health; and social gaming.

Our second educational programme is based on some Gambling Commission data from two years ago, saying there are a high number of students who gamble and a quarter of those who do have debts of £10,000 or more. We developed the Peer Education Offer. In that, we go to universities and train year two or year three psychology students; we train them, give them a living-wage, part-time job and bring YGam’s work to their campus.

There is also an importance in giving parents the tools they need to take the conversation on gambling into living rooms up and down the country. So it should be second nature when you hand your child an ipad or phone, that there is a conversation on digital resilience. There isn’t an education component to the new safer gambling strategy, and I’m not saying this should be it, but our brochure shows what education could provide.

As the seminar moved into the question and answer session, one of the main talking points was brought up by Philip Davies MP, who was chairing the event. Less of a question and more of a statement, Davies pointed out that anyone in the room could have anticipated how the Daily Mail would use the data when granted early access to the Gambling Commission’s report, extrapolating points to match its agenda. Haden responded by saying he was not part of the decision to grant the publication early access.

The conversation then turned to the broader image and responsibilities of the industry. The Commission was again singled out, this time for its handling of the fixed-odds betting terminal saga; operators’ advertisements were described as overwhelming and far too numerous and, as the seminar reached its final stages, the relationship between politicians and gambling companies was examined by Lord Bernard Donoughue.

The final question however, brought the discussion on underage gambling back into the room. An operator of an esports league asked what the panel thought of the relatively new betting phenomenon. Sky Bet's Flint answered by saying betting on esports is still in its infancy. In that sense though, he believes it provides the perfect opportunity for operators to get it right from both business and protection standpoints.