Gambling Insider caught up with Hpybet CEO Andreas Köberl (right) and Interwetten Speaker of the Board Dominik Beier (left) to talk about company culture, German-speaking gaming markets and more. 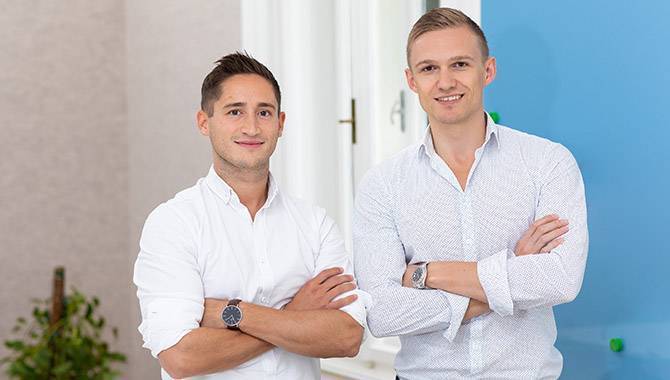 To start off, how do the two of you know each other and what’s your working relationship like?

AK: We’ve known each other for two years and started to engage at a business level when Dominik was still at Sportradar. We worked on sponsorships, social media etc together and, since then, we have engaged on a personal friendship level as well as a business level. We’ve been competitors now for half a year! But Dominik is focused on the online business and we at Hpybet are currently focused on the retail business in Germany and Austria.

You’re both young CEOs (30 and 28). Is this move towards younger workers something that’s common throughout Austria and Germany?

DB: I don’t think it’s a trend, to be honest. It’s a bit of a coincidence for the two of us, because I read an article recently saying the average age of a CEO at a German-speaking company is 54. But, in general, I think there is a bit of a generational change in our industry. The industry started to grow heavily 20-30 years ago and a lot of people from that phase are now ready to retire or have earned enough money to do other things. I think it’s quite a natural thing. For us, we were both in a lucky position to have the honour to get such an experience and challenge.

AK: I agree with Dominik but I will also say there will be more generational shifts. Not only because experienced guys are retiring; I think our industry is very special. It’s becoming more digital: to speak the digital language is getting more important. You also have to establish some kind of cultural change from the inside of the organisation.

If you look at established brands in the sector, they are buying all the guys they can get from creative organisations but there is little change inside the organisation. If you look at my organisation, the average age is under 30, so the focus is completely on the digital spirit. Today, the fast and the agile beat the slow. So we will see a shift in the years to come.

How are you received at conferences and industry events, perhaps by some of the older, more experienced executives in the sector?

DB: Most of them are very professional. If you speak to people at a certain level, age doesn’t matter that much. Okay, you might have someone ask "what’s this young little guy doing here?" or whatever; but I’ve barely experienced this. Everything is very professional and executives know you’re there for a reason and you’re not there for a non-professional reason. In the end, it’s enough to prove it’s not about age and I hope we’re proving that to all our employees, partners and the industry day in, day out.

AK: At the end of the day, you are measured on your results, whether you are 50 or 30. We respect all the established and experienced guys because 20 years of industry experience cannot just be learned. But there is also a growing respect for the younger generation, because the more digital target group becomes more important than ever. It’s hard for an experienced, established bookmaker to move with the times and transform. So there is some respect in both directions.

Both Hpybet and Interwetten are involved in some high-profile football sponsorships. What do your companies aim to gain from these sponsorships, as many firms have different approaches to this area?

DB: Our goals are different. I can speak for Interwetten: obviously as we operate in various different markets like Spain, Greece, Austria, Germany and Sweden, for each market we have different goals. In some markets, our brand awareness is already quite high. In others, we need to build it up. Unfortunately, there’s not a common strategy for one sponsorship in various different markets although there is, of course, a bit of an overspill. But in the end sponsorship is different for every market, whether it’s about brand awareness, bet engagement or fan activation.

When we sign a sponsorship deal, every time it’s a very customised package to achieve the specific goals in our specific markets. We recently became the main betting partner of the Greek Super League, which is quite a big step for us. In Germany though, it’s more about bet activation and fan engagement, so the goals are different. The good thing about sponsorship is you can use it in so many different ways.

AK: For Hpybet, it is not quite the same stage as it is for Interwetten. We started two years ago with three people; two years later, we are 170 in six offices across three countries. In Austria, we are already number three in the retail market; in Germany, we are number five. That’s good growth but it’s not the right time for us to go big in sponsorship. We have reached a certain position where we look at things from a different perspective. So, for example, one of our partnerships is more or less a technology partnership, where we develop new fan engagement products together. In the next one or two years, we will be ready to talk about sponsorships in Germany.

DB: I think also for Hpybet the fact it operates so many retail stores as well, it has a local factor, which we do not have. If there are a lot of shops in one area, it might be interesting for them to have a big local cooperation. We are always targeting on a nationwide basis, no matter what country.

What is the current mood in Austria and Germany surrounding betting sponsorship and advertising?

AK: It’s a bit different in both countries. Germany is way more open towards sponsorship than Austria. When you look at the money involved in sponsorship, Germany is more open towards the commercialisation of sports. In Austria, sponsorship is cheaper and it’s more about emotion at the moment. It’s really hard to get a slot in Germany right now, with prices of up to €4-5m ($4.4m-5.5m) per year. In Austria, it’s a bit more difficult because, if you go too big, you get a lot of bad emotions from the fanbase. I see Germany as more open.

DB: In general, gambling advertising hasn’t reached the level it has in Spain, the UK or Italy (before the restrictions) yet. In general, Germany and Austria are quite open to that topic as well at the moment, because they better understand the value of the money we spend on marketing. What surprises me with the current discussions in countries like the UK etc, is the market will still grow without advertising. So, for us as an operator, restrictions on advertising are not the worst thing to happen. We just increase profitability. If you look at new market entrants though, it’s even harder to gain market share if you have a new brand.

There will always be different communication channels. It is hard for regulators to catch up with the marketing industry. If television advertising is restricted, you might advertise on OTT channels (over-the-top channels such as Netflix, Amazon and Youtube), because they are the "new kids on the block." In three years, OTT channels might be restricted and then you just move your advertising to something else. There are so many different ways and channels to still work in marketing and the affiliate space. Therefore you need proper regulation to have the profits reinvested into your country's ecosystem. I’m fine with not advertising too aggressively and including responsible gaming. But, in the end, too heavy restrictions are just a loss for the media space and for rights holders, as well as an increase in market entry barriers for new operators.

What are both Hpybet and Interwetten looking to get out of the German market, considering pending regulatory changes?

AK: At Hpybet, we are already used to heavy regulation in Austria. There are nine different states in Austria with nine different laws and we have multiple licenses. Currently, they are extremely different. In Germany, it’s not as hard as it looks for purely online operators. For us as a retail operator, it’s a good thing to have clear law. There are a few very critical topics that are still open, such as an online casino ban.

The whole industry will move more closely together. Different operators may move closer together, there may be some consolidation between online and retail; we will see new forms of cooperation. I expect 50% of the retail operators in Germany to disappear.  We have roughly 80 in Germany and all the small operators will have no chance to get past this regulation. There will be a transformation starting next year for at least 18 months and it all depends on the reinforcement.

We see it in Austria, we have several states where it works great; if you comply, you have no problems and if you don’t, the enforcement is very strong. Restrictions don’t help anyone if there’s no enforcement.

DB: As Andreas mentioned, the online side is a bit different here. The online world is a bit different from seven years ago, when the Inter-State Treaty on Gambling was signed. Online is very much undervalued by the Treaty. In the end, it’s such a chaotic situation. If you were to create a budget, which every proper company does at around October/November time, it’s almost impossible to do so as you don’t know what’ll happen from 1 January onwards.

Even if there’s proper regulation from July 2021, what Germany’s doing right now is creating the biggest black market in the world over the next 18 months. Some of our competitors, who are not as compliant as us or Bet-at-home, Bwin and others, are just rubbing their hands and waiting for that transformation period. They will not comply with regulations because they won’t care about licenses and the biggest black market in the world will be established. That’s the worst-case scenario for everyone. Trying to get players back from the black market into the regulated market, that’s going to involve insane costs and a very long time. Even if there’s enforcement in the online world, it’s going to be hard: Denmark is the only successful example where they’ve pushed down the black market from 40-50% to about 4%.

But anywhere else, it hasn’t really worked. We need proper regulation now or we leave it the way it is until 2021, when the real regulation should start. Demand will not decrease and it will just move into the black market, with no one investing in media, sponsorships etc. For a retail operator, it’s not that harmful. Back in 2012, the retail space was already quite well regulated. There are also some different interests between online and retail companies, which have been artificially created by the regulations. I don’t see any reason why it shouldn’t be done properly.