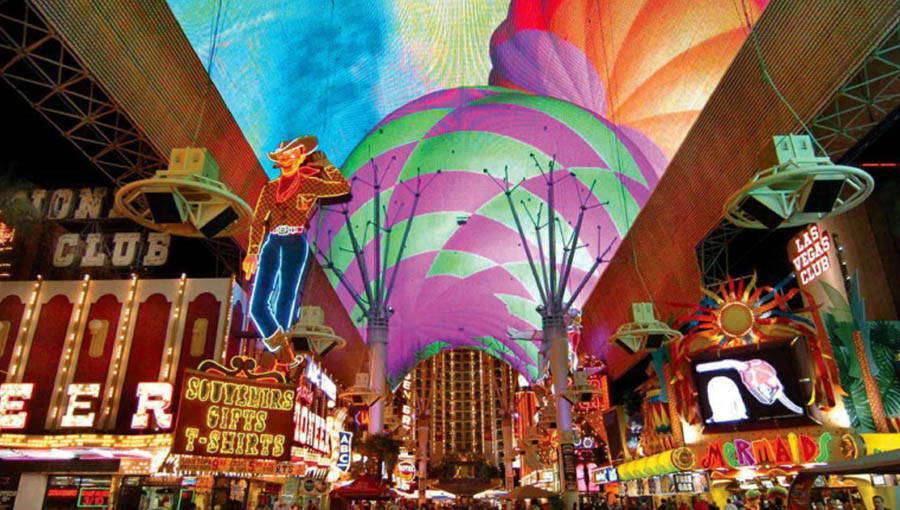 As a resurgent downtown Las Vegas prepares to welcome the next generation, Oliver Lovat explains why anyone interested in the future of casinos should be looking to the past

Since 2010, over 250 MBA students from London’s Cass Business School have come to Las Vegas on a research trip studying strategic marketing. On the final night of this year’s seminar, my students, rather than see one of the numerous superstar DJs playing the hits of our age, legendary superstars performing intergenerational classics, or even making use of long lectures on casino mathematics by chancing their luck against the house, made the decision to leave the glamour of the Strip and head to downtown Las Vegas and drink cocktails on Fremont East.

This isn’t supposed to happen and led me to try and understand the paradox of what is going on in downtown Las Vegas, as it may hold key findings for the future of casinos.

You can always go...
Fremont Street, downtown is as old as Las Vegas, with the 1906 building of The Hotel Nevada (today’s Golden Gate) leading the way for integrated gambling and lodging. The following decades saw the likes of Binion’s Horseshoe, Golden Nugget, California and El Cortez decorate the area with bright flashing neon. However, as land became scarce the new larger resorts left Fremont and mushroomed down the Highway 91, known as today’s Strip.

Over time, Fremont could not compete with the spectacle of the Strip – although Steve Wynn’s Golden Nugget for a time was a challenger. A general decline in relevance set in, especially after the opening of the Mirage and 1990s Strip development.

My hypothesis, supported by anecdotal evidence, is that many traditional Strip customers have switched to downtown as the place where they stay to gamble, as the Strip demographic has changed to a younger and more international body

According to the LVCVA (Las Vegas Convention and Visitors Authority), in 2014 only 5% of visitors to Las Vegas stayed downtown, however those customers have some interesting characteristics:
- 91% have visited Las Vegas before, with the average customer coming 7.8 times over the past 5 years.
- They spend longer in Las Vegas than Strip visitors (21% spent more than five days, as opposed to 15% on the Strip).
- They are more likely to book direct with the hotel rather than use a third-party website (46% to 41%).
- 36% of visitors said they had visited downtown on their current trip, down significantly from 45% in 2010, but up from 34% in 2011 and 30% last year.

So what we see is that the traditional, mid-west, Las Vegas customers are proving loyal to the downtown resorts. My hypothesis, supported by anecdotal evidence, is that many traditional Strip customers have switched to Downtown as the place where they stay to gamble as the Strip demographic has changed to a younger and more international body.

The UNLV Center for Gaming Research notes that in 2014 downtown Las Vegas had 20 operating casinos, compared to 30 back in 1992 when data started being recorded. From 572 tables back then, only 412 were in operation in 2014, but this was up from 393 in 2013. For context, downtown Las Vegas has about half as many table games than the Venetian in Macau!

But the 36% of tourists (both domestic and international) staying on the Strip who go downtown equates to 14m people – almost double the international visitors who visited Barcelona in 2014 .

Something changed
Fremont Street was in structural decline as Las Vegas’s local casinos, Native American casinos and budget operations on the Strip offered the customer base a better proposition. As recently as 2008, downtown was seen as a memorial to past glories and a niche attraction for low rollers and gaming buffs. Attempts to stimulate tourism led from the City Hall had failed.

In 2009, a competition was launched by the El Cortez (the oldest continually operating casino in Las Vegas) to find a local designer to renovate an old hotel block, which became the 64 Cabana Suites. This was followed by the creation of Emergency Arts, an art collective, which occupied a former health clinic and El Cortez Office. The block to the east of the Fremont Street Experience saw independent bar owners who couldn’t own or operate due to the corporate environment of the Strip, experimenting with cocktails and creating urban spaces for locals.

Lady Luck closed in 2006 and the Plaza required a renovation. Thanks to the failure of the Fontainebleau, the owners of both seized the opportunity to acquire their furniture and fittings, and undertook full renovations. The Plaza reopened in 2011 and Lady Luck opened in 2013 as the Downtown Grand.

Derek Stevens, a regular visitor to Las Vegas casinos, thought he’d try his hand at owning one! The Stevens brothers had previously invested in Golden Gate, but in acquiring Fitzgerald’s in 2011, Derek led a full-scale redevelopment and rebranding of the property. Out were the lucky charms beloved by few and instead came The D, a high energy casino, with scantily clad dancing dealers, dancing in between blackjack hands and 24 hour sports on multiple TVs. Derek Stevens himself sits at the corner of the bar, welcoming guests in with a smile and a handshake.

Within three years, downtown had gone from unloved to having a sense of community provided by the artists – many of whom had moved nearby – quality room product in several properties and hands-on owners spending time on property.

The paradox is how can casino and hotel managers integrate the traditional casino customer that provides the majority of revenue with the next generation of switched-on, tech-savvy customers

Shortly after in 2011 Tony Hsieh, CEO of Zappos, decided to relocate his business from Los Angeles to downtown Las Vegas, creating the Downtown Project, investing $200m in property, $50m in start-ups, $50m in education programmes and $50m in hi-tech businesses. Hsieh is seeking to increase residential density in a once transient community, creating an environment of co-working, cross-pollination of ideas and innovation. A model micro-society where work, life and play are all integrated.

Where once Las Vegas was famed for implosions, downtown is being painstakingly restored, paying a nod to its history. The City of Las Vegas has invested alongside the private sector in The Smith Centre for the Performing Arts, and the former Courthouse is now the Mob Museum. Both opened in 2012. Many of the original neon signs have been restored as public art and, in keeping with the history, all new openings must include neon in their signage. The prominence of such ornate and colourful signs reminds any visitor that this is still Las Vegas and it is proud of its heritage.

Most weekends, downtown has street festivals, featuring art, food and music, all safe and focused on families who once feared to drive through the area. Life is Beautiful 2015 arts festival is headlined by Stevie Wonder and will have tens of thousands of visitors coming to the area who wouldn’t normally be near. Local businesses have moved into the area and restaurant openings are common. The biggest problem facing the area is the lack of affordable housing for people seeking to live there.

Paradox
In May of this year Gov. Sandoval signed legislation allowing for skill-based gaming for the State of Nevada. The owners and managers of the casinos on Fremont are typically non-corporate and can therefore make changes at a speed that other markets cannot, so innovation, risk and decision making have been factors that have enabled downtown Las Vegas to successfully adjust to the market. Skill-based gaming is firmly on the radar.

In downtown Las Vegas, the paradox is how can casino and hotel managers integrate the traditional casino customer – which is different to the average Las Vegas visitor – that provides the majority of revenue and has been the bedrock of the post-war gaming industry, with the next generation of switched-on, tech-savvy customers, who are choosing to live in the environment where the casinos are an everyday part of life. If skill-based games are to be focused at the younger market, downtown Las Vegas will have some of the first generation of players.

That the future of gaming may be so closely associated with the past may be an irony, but also testament to the success of this generation of operators in regenerating downtown Las Vegas, who are proving visionaries in this market.