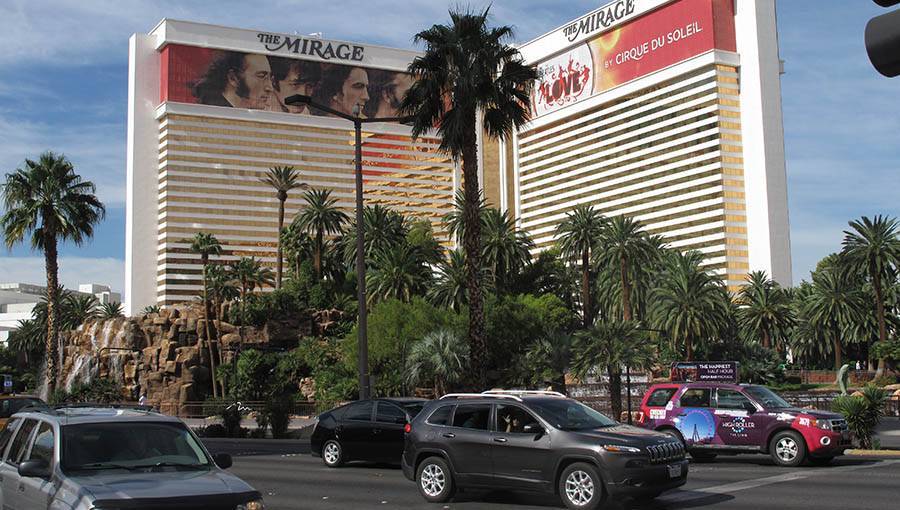 The rise of the outsiders
Oliver Lovat profiles the changing face of Las Vegas leadership, charting the ascension of those holding business degrees
By Oliver Lovat

On 22 November 1989, as the Mirage opened its doors for the first time, the world marveled at the first fully-formed at birth, integrated casino resort. With 3,000 rooms, villas, a convention centre, an exploding volcano, and Siegfried and Roy’s white tigers prowling the lobby, there was nothing else like it anywhere on earth. But for those behind the giant fish tank there was a sharp intake of breath.

Down the road on the corner of Tropicana, but a million miles away in terms of concept and customer, Bill Bennett was putting the finishing touches to Excalibur, the latest development from Circus Circus Enterprises, which went public in 1983, raising significant equity.

The Mirage cost $630m. It needed $1m per day to break even, in a city that had a cap at $300m. The financing of the Mirage has been written about on many occasions, but it is worth recalling how innovative it was. Steve Wynn’s equity for the Mirage came from selling the Golden Nugget in Atlantic City to Bally’s, with the remaining $531m raised on the 'junk bond' market by Michael Milken. Raising funds on the junk bond market was not new. In fact it was the financing tool of choice for Meshulam Riklis in his acquisition of the Riviera a decade earlier. However this was the first time a casino resort was being fully funded by bonds like this on such a scale.

In year one, the Mirage generated revenues of $420m. The Excalibur was built for $290m, under half of the Mirage, but with 900 more rooms. It was financed out of cash resources and by the end of year one had generated $85m in profits – a larger profit margin than the Mirage! This is seen as the perfect point at which the world of sophisticated finance first met with a growing band of professional casino operators.

At the time, these companies were lauded and were frequently in the best performing stocks, winning multiple awards and external praise for innovation and business practices. The commercial world woke up to the opportunities that Las Vegas and casinos could offer, but if one delves deeper, the 'smarts' had been at it for nearly 20 years.

The likes of Nehme Abouzeid, Jason Gastwirth, David Tsai and Josh Swissman would hold their own in any corporation in the USA, but have chosen to focus their skills on reinventing Las Vegas for the next generation of visitor

Also in 1971, Bill Harrah took the Reno-based Harrah’s company public. In 1980 it was acquired by Holiday Inn. In 1998, the new company sold off the traditional Holiday Inn business and latterly the other hotel businesses, only retaining the much more profitable gaming side, emerging as Harrah’s.

What we note is that as external investors bought into gaming, the gaming divisions were the best performing in each company, and in each case led to separate spin-offs or trades at a higher value.

The final case study is from 1969, as the owners of Lum’s Hot Dogs in Miami acquired Caesars Palace for $60m. The Perlmans grew the new company, Caesars World, expanding to Atlantic City. When ITT acquired the company in 1994, they paid $1.7bn, which was followed by acquisition in 1998 by Park Place for $3bn.

The new 'smarts'
Historian and academic Dr Larry Gragg has studied the role of Las Vegas in popular culture, and a brief exchange in Paul Verhoeven’s 1995 film Showgirls illustrates the changing face of Las Vegas:


The 1990’s growth in casinos would not have been possible without the 'outsiders' Milken and Riklis, who were both holders of MBAs and who saw the clear complementary synergies between the bond markets and the high margin elements found on the casino floor.

Bernhard, Green and Lucas define this changing phase as the MBA era: “In this new era, leadership has been “imported” from educational environments such as Harvard Business School (Harrah’s CEO Gary Loveman), the University of Pennsylvania (Steve Wynn), and the University of Southern California (MGM Mirage chief executive J. Terrence Lanni). Moreover, former Mandalay Bay CEO Glenn Schaeffer attended the highly prestigious Iowa Writers Workshop, widely reputed to be the most exclusive program in the country.”

Indeed, this change of leadership became more pronounced in the late 1990s and throughout the 2000s as resort operators hired from outside the traditional talent pool, bringing the likes of David Norton, Jim Murren and Rob Goldstein to the gaming industry.

A cursory look at the next generation of gaming leadership shows a fascinating trend, as the graduate training schemes pioneered by the likes of Caesars and MGM at this time, and MBA hires by the likes of Wynn and LVS, advance their careers to leadership positions, bringing with them the multi-discipline insights of finance, strategy, marketing and organisational behaviours that are learned through MBA programmes and experience of the gaming industry.

There are few new faces that have made their mark on Las Vegas in the way that Derek Stevens has. Beneath the larger than life personality, Mr Stevens is the holder of an MBA and comes to Las Vegas with the eye of a multi-discipline focused businessman. His properties – Golden Gate, The D and the former Las Vegas Club are textbook case studies straight out of an MBA playbook and have all made great improvements to Downtown Las Vegas.

This generation of leadership is strong – perhaps stronger than any time in the past. The group is diverse, knowledgeable, educated and skilled, with a passion and understanding of both gaming and wider business practices

The likes of Nehme Abouzeid, Jason Gastwirth, David Tsai and Josh Swissman would hold their own in any corporation in the USA, but have chosen to focus their skills on reinventing Las Vegas for the next generation of visitor. Within their respective companies they have demonstrated the real value that they bring to the industry. Expect to hear more from them.

The other 'smarts'
Not all of the gaming leadership has come through the MBA route. The story of Bobby Baldwin rising from poker player (and 1978 WSOP winner) to leading executive is well known, and the maverick career of Bob Stupak (also a WSOP bracelet winner) as eventual Stratosphere developer is a movie waiting to happen.

However the next generation of on-the-ground operators haven’t learned their craft skipping from poker tables to 24-hour casino cafes. Their training ground has been in building the nightlife industry that has made Las Vegas the world’s number one nightspot in the world.

September 2015 marked the 10th anniversary of Tao, helmed by Jason Strauss’s Strategic Group. In 2010, the group opened Marquee at the Cosmopolitan. Tao and Marquee have brought in hundreds of millions of dollars in revenue and have been the subject of Harvard Business School Case studies. Strategic are not alone; Wynn Resorts’ nightlife team, the now defunct Light Group and the Hakkasan Group have become multi-million dollar businesses.

Jesse Waits, Sean Christie and other disciples of Victor Drai and the House of Blues have proved themselves operators of the highest order, managing to build solid businesses and reinventing the casino floor like the poker players did in the previous generation. With Waits and Christie heading for executive roles in the coming year, this will be the coming of age of the streetwise executive, schooled in the hand-to-hand combat of hospitality in a high pressured environment.

The future of Las Vegas
Every week another investment company is linked with a move to invest in Las Vegas, and why not? The investment fundamentals are strong, built by a generation of some of the smartest people in business today.

The leadership of the 1960s-1980s is passing the torch. In the past 18 months we have seen the passing of Kirk Kerkorian, Jackie Gaughan, Burton Cohen and other notable leaders who built Las Vegas.

This generation of leadership is strong – perhaps stronger than any time in the past. The smarts who once sat as outsiders have become insiders, as the gaming industry has spent time and resource developing a progressive and forward-thinking talent pool. This group is diverse, knowledgeable, educated and skilled, with a passion and understanding of both gaming and wider business practices.