Taking a place at the top table 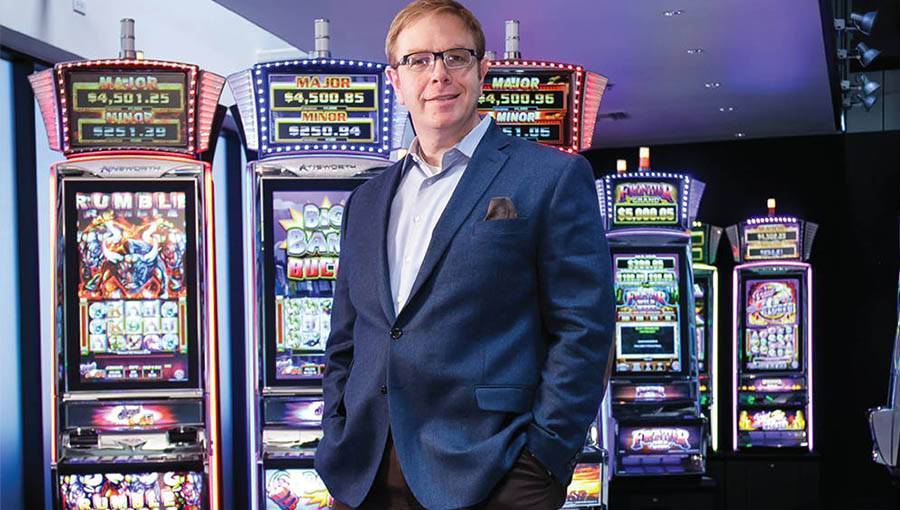 ﻿Mike Dreitzer, President – North America at Ainsworth Game Technology, says the manufacturer’s US operations have reached a new level in 2016

There has barely been time to draw breath for Ainsworth Game Technology’s North America division in 2016, with recent months playing host to a significant acquisition and the opening of new headquarters. Such activity made it the perfect time to chat with President Mike Dreitzer, who also offered comment on his firm’s finances and the wider company’s recent Novomatic deal. It soon became clear that Dreitzer has his division on an upward trajectory, with exciting times ahead.

Can you briefly summarise your career to this point.

I started off as an attorney, graduating from law school in 1994. I was an administrative lawyer for a few years and ended up representing the Nevada Gaming Control Board and Nevada Gaming Commission.

From there I moved to Mikohn Gaming which became Progressive Gaming Corporation. I worked there for over six years. I went on to co-found and be a partner in a company called Global Gaming Group, which was a game design company. This was from 2005, in the earlier days of third-party content providers. Now it’s certainly much more common, but that was an interesting piece of the industry to be part of at that point.

From there I went on to run BMM Testlabs in the Americas – we set up a new office in Las Vegas while I was there.

In late 2013 I came to Ainsworth where I’ve had a great opportunity to continue to grow the company and our efforts in the North American market.

What is your strategy for increasing market share in North America in the face of some big-name competition?

There’s a couple of areas we look at. First and foremost it’s about products and product content. For example we have more than 35 titles that have been on casino floors for more than a year that still do above house average. That shows our customers that an investment in Ainsworth is a long-term investment and that we’re able to provide products that perform over a longer period of time. A lot of products in this industry come on and then fall off, but we tend to have greater staying power in terms of our product performance in many markets.

In addition, it’s about people. We have a great team here at Ainsworth. When I came here our CEO Danny Gladstone was in the process of moving back to Sydney and I have come in and tried within North America to continue what he started, which was to grow a class A team. I would put our talent and team up against anyone in the industry.

It’s also important to note that there are a number of markets where Ainsworth is either a newer product or is not even in there yet. We’ve been in Mississippi for less than a year-and-a-half, and Arizona for probably that same length of time as well.

Louisiana we just got into and Colorado we’re not yet in – we hope to have that licence within the next few months. So there are some pretty significant markets that we’re not in yet.

In addition to that, from a Class II perspective, with the acquisition of Nova Technologies we’re able to access the 65,000+ Class II market in a way that was unavailable to us before because we didn’t have the product. So there’s a whole host of newer Class III markets and new Class II markets that we believe we can have greater success in.

How significant was that Nova acquisition?

It was very important to us. Nova gives us a presence in Class II where we couldn’t have been before. Nova has about 1,500 games on route, two-thirds of which are Class II.

It also has a really strong title library of 30+ titles which we inherited. In addition to that they have an extremely talented team – folks who have been involved in Class II for years with great expertise that we have now acquired, and we rely on them to move the strategy forward. Our particular strategy is to give operators not only the Nova library but in addition we’re growing the Class II library of Ainsworth titles, putting them in the Class II format with Class II maths.

On the hardware side we’re going to have both the Nova library and the ever-growing Ainsworth Class II library available in both the A560 Dual Screen cabinet as well as Nova’s Atlas 100 cabinet, which will continue to be offered, supported and deployed. So we’re giving operators in the Class II space a significant choice across two different cabinets and two very significant library portfolios.

We feel as though the Class II market is a very crucial and strategic market for our tribal customers and partners. It’s something that is very important to them – it’s actually growing across many jurisdictions, and we feel like being able to participate in this allows us to be a full tribal partner. Class III is an important piece of it but it’s not the whole picture.

It’s also important to note that Nova has very proven and successful titles such as China Gold, Dragon’s Heat and Gorilla Diamonds, among others. So we’re coming into a company that has a track record and we believe we are going to take that to the next level. Class II is very exciting for us at a time when a lot of manufacturers and others are walking in an opposite direction or deemphasising Class II, or not supporting it as they have in the past. We are going the other way and supporting it in full.

How different is it trying to build a relationship with the tribes compared to commercial casinos?

Tribal customers and commercial customers each have their own needs – they are different.

One of the needs in listening closely to our tribal customers is that they have a need for compelling Class II products that play very much like Class III.

If we want to play the role of trusted advisor and really become partners with our customers then we need to drill down into each segment and really figure out what the needs are. I wouldn’t say that either is better or worse, they just have different needs.

North America revenue was up 42% for the second half of last year. How in line with your expectations was that figure?

Certainly the market overall has been challenged. There have been limited new openings and a limited replacement cycle in most of North America, so we’re of course happy to experience growth. But we certainly can’t rest on our laurels. Our eyes are on the future and between the introduction of Class II, the opening of our brand new facility in Las Vegas to which we just moved and the upcoming launch of our state-of-the-art A600 cabinet at G2E, we haven’t had much time to celebrate the success because we’re always working towards the future. But all of these factors bode very well for our continued growth and success within North America.

How will the opening of your new Las Vegas headquarters impact operations?

The facility makes a really big statement. It shows a commitment to the North American market and a commitment to continuing to provide products and services to our customers for years and years to come. It’s a nearly 300,000 sq ft facility – a state-of-the-art building and we’re very excited. This will not only make the statement that we’re here to stay, but it also makes the statement to our customers that they can trust us, that we aren’t going anywhere and will continue to provide the high level of products they’re used to.

Such a nice building can really do wonders for the culture. We have a strong culture here at Ainsworth, people have always had pride and a sense of ownership and desire to have it succeed, but since we’ve been here everybody is super excited about the building and what it means for the company.

When you go across the Las Vegas Valley, pretty much everybody knows and is talking about the big red A’s on our building. So we’re taking our place, we believe, among the top tier of the manufacturing segment in the gaming industry. You don’t get there unless you have your physical plant, and now we do so we’re very excited about it.

Novomatic is set to acquire a 53% stake in Ainsworth. How will this impact your North American operations?

The only thing to say about that now is that for Ainsworth it’s business as usual. There’s a shareholder vote coming up in June on the topic – we’ll see how that goes. But certainly Novomatic is an outstanding company.

What are the biggest challenges and opportunities facing Ainsworth North America in the coming year?

We just have to compete in a very competitive marketplace. Market share is not handed to anybody, you have to earn it based upon product performance, support of customers and everything that goes with that. So we will continue to do what we do and earn floor share. I’ve always said that so long as our amount of earnings exceeds our actual floor share on a percentage basis, they’ll always want more. So we’re going to continue to earn that floor space by providing excellent products, outstanding customer service and by being trusted advisors to our customers.

Where do you hope Ainsworth’s North America division will be positioned in a year’s time?

One year from now it will just be about continuing the progress of our business plan on both the Class II and Class III side.

We’ll continue to see sales volume increase, we’ll continue to see our Class III route size increase and we’ll continue to make progress in our Class II business. I was told from day one here, and I believe it to be the case as much today if not more, that the process of being successful in our industry is more of a marathon than a sprint. So you have to take the time to build customer relationships, take the time to get product out there that proves itself and continue to grow from there. And ask for more and more footprint based upon how you’ve done and what the future looks like.