Maxim88 has announced a two-year deal with former Liverpool and Manchester United footballer Michael Owen, who will become official Brand Ambassador in Asia. 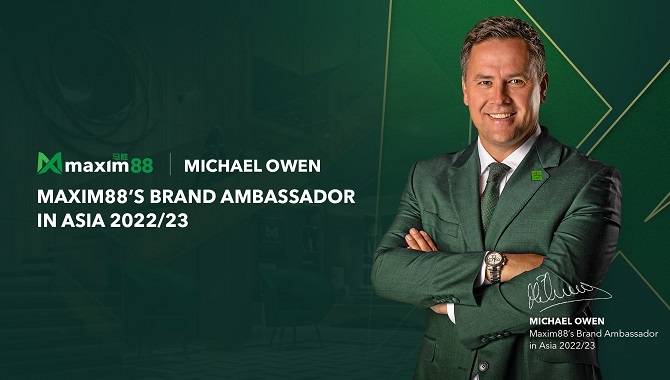 “I am delighted to join hands with Maxim88 for their marketing initiatives in Asia. As a brand ambassador, I am looking forward to engaging with more sports fans and am committed to giving my absolute best in this partnership with Maxim88 to represent all the great qualities that Maxim88 stands for – outstanding, innovative and entertaining!” said Owen.

The ambassadorship was brokered by Outlast Sports Entertainment for Maxim88.

Outlast CEO Salauddin Sinnakandu commented: “We are thrilled to have played an integral part in connecting one of Asia’s biggest online betting platforms with a respected name in football like Michael Owen.

“We are certain that this partnership has the dynamics to bring about valuable results and greater opportunities for the region. The hope is to replicate the good results Maxim88 has after partnering up with the well-known gaming provider, Evolution Gaming.”

Prior to becoming Maxim88’s Brand Ambassador in Asia, Owen signed a deal to become the face of a campaign launched by The Pools.

However, Owen was recently judged to have breached UK laws regarding gambling advertising, having used his Twitter account to promote an unlicensed cryptocurrency casino to the British public.

A similar partnership was confirmed in Asia recently (even the brand name being similar) as M88 Mansion signed with Italian football club AC Milan.