Germany’s World Cup exit has got the bookies sweating 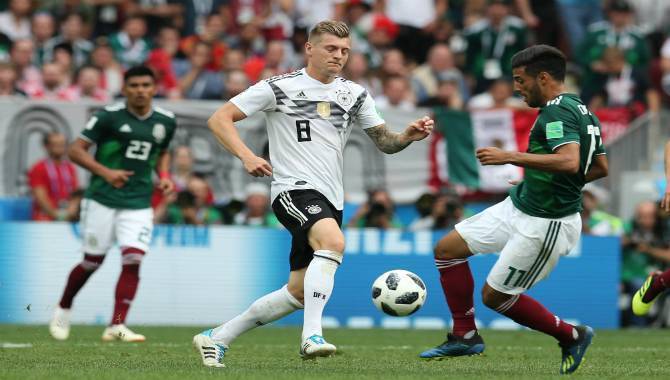 Germany’s elimination in the World Cup group stage has bought losses to some bookmakers while others are feeling the heat.

William Hill had Germany at odds of 1/7 to beat South Korea, and the odds for South Korea to beat Germany were 12/1.  In the event, Germany was knocked out of World Cup after 2-0 defeat on Wednesday.

On paper, it sounded like Germany would certainly win the match based on the bookmakers’ odds. This coupled with the 3pm kick off time meant fewer wagers were being made, but William Hill only made a return of 55%.

“We won 55% of all stakes on the Germany match; clearly it was a 3pm kick off and at 1/7 on, small punters were getting on South Korea,” said a William Hill spokesperson told Gambling Insider.

Fewer wagers were also made on in-game activities, such as the first player to score, the time a goal would be scored etc.

Riskier wagers were being placed on South Korea which, with odds of 12/1, enticed gamblers with the potential for higher returns, leading to William Hill winning just over half of the stakes on the game.

The surprise defeat came after Germany’s victory against Sweden where Toni Kroos scored in the 89th minute of play against Sweden. It was one of William Hills’ biggest loss in the World Cup so far.

“The Germany late goal in 89th minute was the biggest single change of fortune/payout. We were 2 minutes away from winning £2 million and we ended up losing £4 million," William Hill told Gambling Insider.

Betfred is also starting to feel the heat, as Germany’s exit has enhanced the chances that Brazil could win the World Cup.

“Germany being knocked out hasn’t really affected us in terms of payout, but now this has increased the odds of Brazil wining, this has got us sweating,” Peter Spencer, a Betfred press officer, told Gambling Insider.

If Brazil does win the world cup with Neymar as the top goal scorer then Betfred will expect a loss of about £3million.

Betfred could face even bigger losses of £5m if England wins the cup with Harry Kane as top goal scorer.

Betfred suffered heavy losses during Englands match against Panama, which saw a handful of people recieve a massive payout after putting down £90 stakes on England to win at 33/1 and a large number of bets for both teams to score.

Spencer said bookies are seeing a return of patriotic punters in this year’s World Cup and the way younger people are betting is making it exciting, but tense.

Looking ahead, William Hill think England is likely to come in second place in the cup.

England are currently at 7/1 to win the World Cup before their matchup against Belgium and William Hill believe that second place in the group stage guarantees a better chance of winning.

“At the moment, England are 7s to win the World Cup but now we know pretty much every side who has qualified, we say with more certainty that second spot in Group G would see the price come in to 6/1 and topping the group would see the price drift to 8/1,” said William Hill spokesman Joe Crilly.

“As it is at the moment, the 7/1 about England is the closest they have been to the top of the betting since the 2002 World Cup.”