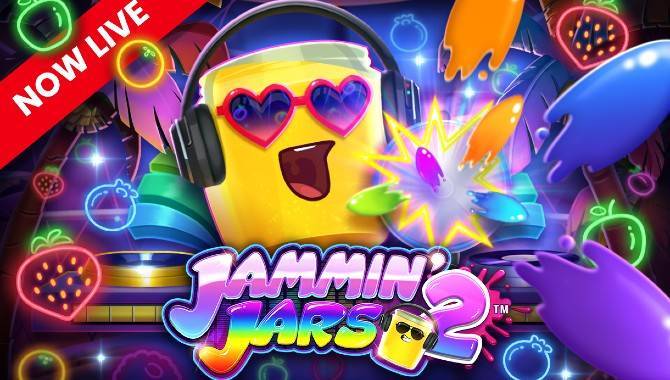 2nd June 2021 - B2B gaming supplier Push Gaming has launched the much-anticipated sequel to one of its greatest hits with Jammin’ Jars 2.

Back by popular demand and with even more excitement, Jammin’ Jars 2 hits the floor with its new star guest, the Giga Jar DJ.

The thumping base game is set to get players dancing to the rhythm as Jam Jars jive across the dancefloor with growing multipliers along with instant prizes that can reach up to 1,000x.

Gold Vinyl symbols fly across the reels filling a meter that allows progress through five levels. Reaching the fifth offers the chance of the all-new Giga Jar feature. In it, all existing symbols on the reels disappear and the Giga Jar randomly adds three or four Wild Jar symbols that will increase in multipliers.

Giga Lands on the reels as a 2x2, paying 3x3 or 4x4 instant prize block. Eight Giga Spins then start and all Instant Prizes that land stay on the reels throughout the remainder of the feature.

With Fruit Blast and Free Spins also appearing to boost in-play excitement, Jammin’ Jars 2 is set to rock the house of operator lobbies in markets everywhere.

Coming on the back of recent hit titles Dinopolis and Land of Zenith, this game is the latest to highlight Push Gaming’s entertainment-first philosophy in game design.

Commenting on the release, James Marshall, CEO at Push Gaming said: “Everyone’s favourite game is back and it’s groovier than ever! The first was one of our biggest hits and we’re sure players will be delighted to see its sequel.

“We’ve taken everything that was great about the original and cranked it up to eleven. We’re confident fans won’t be disappointed!”

Marking its tenth anniversary last October, Push Gaming has continued to go from strength to strength this year following the acquisition of its MGA and UKGC-licensed platform in 2020.

Established as one of the industry’s most entertaining suppliers, Push Gaming is live across the majority of Europe’s key regulated markets with the likes of Casumo, LeoVegas, GVC, William Hill, The Rank Group and Norsk Tipping.