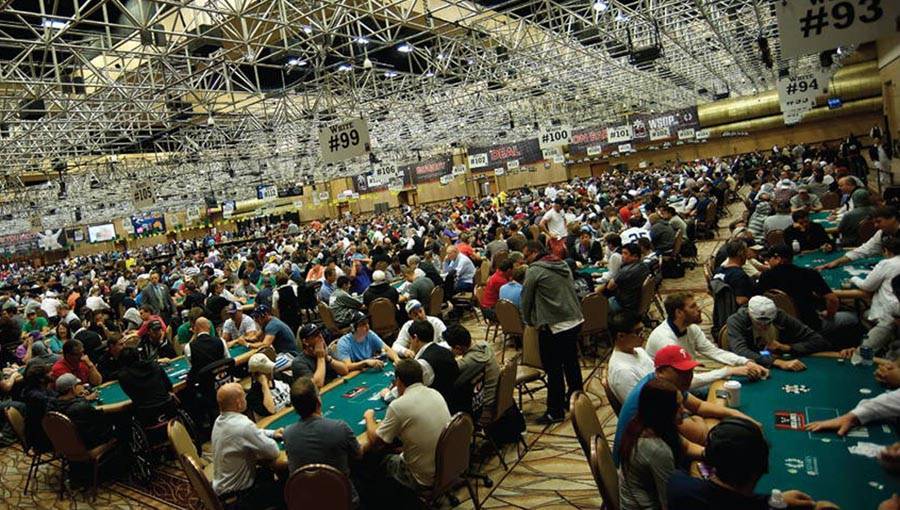 Many forms of entertainment host premier events that act as a pinnacle for their fans. Football supporters have the World Cup, just as music lovers have Glastonbury or Coachella.

Of course, for the poker community, all roads point to the World Series of Poker (WSOP) every June and July. While the WSOP may not be able to attract quite the same number of visitors as some of the aforementioned spectacles, where it stands out is in the additional opportunities that arise for the poker player or fan. It is unlikely that there would be another football competition going on in the same city where World Cup matches are being played, or that many other concerts will be held in Somerset during Glastonbury, but if you’re a poker player travelling to Vegas and you’re planning to be in the city for a gaming-fuelled holiday, the possibilities for playing poker away from the Rio All-Suite Hotel & Casino are so great that you could devote much more of your stay to doing that.

So what impact does the WSOP have on the Nevada land-based casino industry as a whole?

You would only need to look at the player numbers in the event to see that there is a wave of gamers that could be targeted by operators.

The bulk of the 2016 WSOP will run from 31 May to 18 July at the Rio, with 18 July being the date that the Main Event will be whittled down to its final table, before the November Nine return to play out the encore of the event months later. Last year’s series attracted a record 103,512 entrants, according to Caesars Entertainment, the owner of the WSOP (the brand was sold to Harrah’s Entertainment in 2004) across 68 events, and the overall prize pool was over $210m.

However, the statistics would actually suggest that all those poker players descending on the city, despite the temptations to gamble elsewhere, have perhaps reserved their funds for the WSOP. June 2015 was the worst month for casino gaming win in Nevada last year, with $830.9m, down year-on-year from $906.9m. Seth Palansky, VP of corporate communications for Caesars Interactive Entertainment (CIE) and editor-in-chief of WSOP.com, does not believe the WSOP is related to that low number by Nevada’s standards.

“This is a terrible way to look at it, because you take away convention business and it will obviously look quite different,” he says. “With schools out, vacations in full swing and conventions at a halt, June in Las Vegas is about putting up with the heat and enjoying the day clubs, nightclubs and poker.”

On the online side, the story holds a different narrative. The Nevada Gaming Control Board (NGCB) only posted i-poker revenue figures between February and December 2014, and June’s total was the highest with $1.04m. The NGCB stopped reporting the figures when Ultimate Gaming left the market, as the figures are now generated by less than three locations.

Palansky says: “This says it all. In June 2015, WSOP.com did more business in one month than both Ultimate Poker and WSOP.com did in the entire year in 2014.”

John DeCree, Equity Research Analyst for Union Gaming Group, thinks that the WSOP only affects a small vertical. He says: “The WSOP does attract incremental poker play, though it is still a relatively small contributor to the overall gross gaming revenue picture in Nevada and in the US. Many casinos do run their own poker tournaments and promotions during the WSOP event to feed off the buzz. The media attention also attracts incremental poker play that tends to last for about a month after the WSOP, before poker revenues regress back to normal levels.”

Figures provided by the Las Vegas Convention and Visitors Authority (LVCVA) show that the visitor volume for May last year was 3.7 million, up from 3.6 million a year earlier and higher than any other month of the year, and 3.6 million for June, up from 3.5 million. It is difficult to gage what effect the WSOP had on these figures, and there does not appear to be specific data showing what number are poker players alone. The number for May 2015 could have been driven by the unification world welterweight title boxing fight contested by Floyd Mayweather Jr. and Manny Pacquiao, hosted by the MGM Grand Garden Arena. Gaming win for that month was $1.003bn and was the highest monthly total to have been reported in 17 months.

That provokes a question about what the WSOP can bring to the city in comparison with the attraction of a well-publicised boxing match. Palansky is defiant that the WSOP can in fact be the more desirable bait for casinos, but that it lacks the sufficient attention it needs to be in that position.

He says: “Well, we had one poker event last year feature 22,374 entries, all paying $565 each. I think that compares very favourably to a boxing event seating 17,000 down the street with their average ticket price. The issue is we do a poor job doing research studies measuring the WSOP’s impact. Maybe that’s because we are too busy managing the event and preparing for it, etc., but the bottom line is we have no doubt the WSOP is as big a driver as anything this town offers on an annual basis.”

DeCree disagrees, stating: “High-profile boxing matches and similar events are a far greater draw to Las Vegas than the WSOP and are a substantially higher economic contributor.”

If an amateur winning the WSOP as Moneymaker did in 2003 could spark another poker boom, then perhaps the Main Event will have to be won by a player who has never previously picked up a playing card to drive enough players to Las Vegas for operators to pay more attention to the potential of catering more specifically to WSOP players.