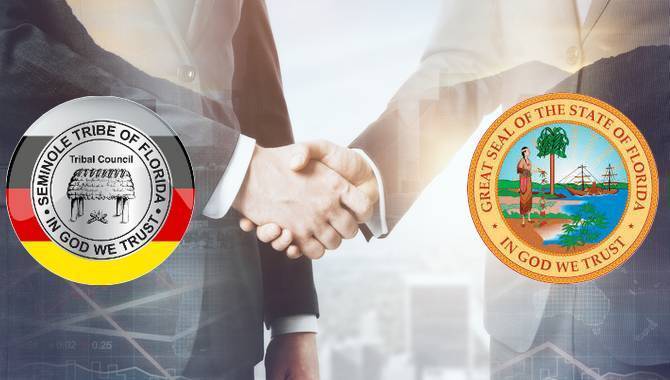 The Seminole Tribe and the State of Florida have reached an agreement over an amended compact granting the tribe card and slot gambling exclusivity in return for $300m in revenue sharing for the state.

The new deal ends litigation between the two regarding an alleged breach of the original compact with the state in 2010 regarding the use of gaming devices in non-tribal facilities and a 2017 countersuit launched by the state.

Following the 2017 dispute, the Seminoles placed revenue sharing fees into an escrow account instead of state coffers. That account accumulated $120m which will be used as part of the new compact payment.

Through revenue sharing and the escrow account the Seminole Tribe will contribute $300m in total to ensure exclusivity of slots and card games such as blackjack. The payments will stop after the end of the legislative session in May 2019.

Announcing the deal, the Governor of Florida, Rick Scott, said: “Since I took office, the Seminole Compact has generated more than $1.75bn which has helped our state make historic investments in things like Florida’s education and environment. Revenue sharing payments from the Tribe will carry on as the Florida Department of Business and Professional Regulation (DBPR) continues its work of aggressively following and enforcing Florida’s strict gaming laws and rules.”

The Seminole Tribe of Florida’s Chairman, Marcellus Osceola, added: “The gaming compact, which runs through the year 2030, is good for the people of Florida and good for the members of the Seminole Tribe. The Tribe is investing more than $2.4 billion to expand its Seminole Hard Rock Casinos in Tampa and Hollywood and is hiring thousands of Floridians to fill jobs in construction and as permanent team members.”

Floridians will go to the polls this November to determine whether future casino expansions and developments should be a public decision instead of the state legislatures. The current agreement specifically states that this agreement will not affect the outcome of that vote.