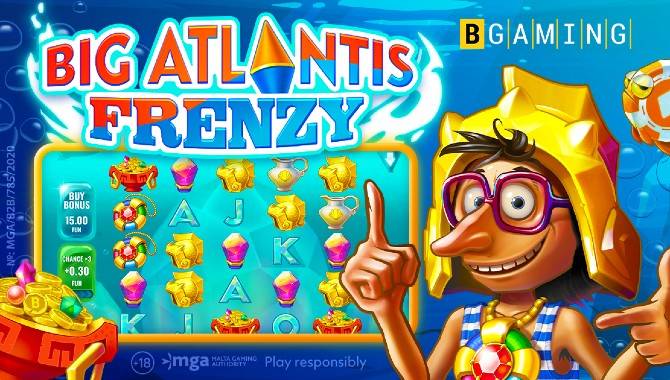 BGaming releases Big Atlantis Frenzy, the new slot that captures features of several mechanics at once. The Big Atlantis Frenzy is a sequel to BGaming’s Dig Dig Digger slot, launched in 2021 and created in collaboration with a famous comedian.

The Big Atlantis Frenzy tells a story of an incredible adventure of the charismatic archeologist desperately searching for riches. This time the character takes on the role of eccentric explorer of the underworld and sets off for an adventure to the world of Sunken Atlantis island.

The Big Atlantis Frenzy captures the best mechanics of ‘fishing’ slots and is enhanced with a line of features to increase players' engagement. In addition to traditional Bonus symbol, Wilds, and Free Spins, the slot comes with an independent reel size change option that allows players to set 5x3, 5x4, or 5x5 reel sizes increasing the number of paylines and the win potential of a bet.

Compared to the Dig Dig Digger, its sequel Big Atlantis Frenzy was upgraded with a special Fish symbol, which awards players with random amounts of money, and Buy Chance, which triples the chance of Free Spins fallout. The Wild symbol, characterized by the image of an eccentric explorer, can drop on any reels and replaces any symbol except Bonus and Fish symbols. During Free Spins, every fourth Wild symbol retriggers the feature and gives ten additional Free Spins.

“We want our slots to be charged with joy and are constantly working on new types of entertainment for our players. The Big Atlantis Frenzy is an example of such an approach, it is the perfect mix of fun and outstanding features,” Kate Puteiko, BGaming’s Product Marketing Lead, said.

The character of an archeologist, familiar to players from the Dig Dig Digger slot, was modified for the new slot into an eccentric explorer of the marine world. As well as the digger, the new character for the Big Atlantis Frenzy was created and voiced in collaboration with Vadim Galygin, the famous showman in Eastern Europe. The showman cheers players, сompletes spins with jokes, and speaks in the French manner of Jacques-Yves Cousteau, famous scientist, and explorer of the underworld.

“The whole team, the designers, the analytics, and the developers are all on the same wavelength, and the synergy of this collaboration is fantastic. I was happy to join the team again and impressed by BGaming’s approach to players' entertainment,'' Vadym Galygin commented.

The Big Atlantis Frenzy slot is already available to players of 7BitCasino and HellSpin Casino.

The release of Big Atlantis Frenzy is preliminary to another BGaming's big launch. A new version of the hit Lucky Lady Moon enhanced with MEGAWAYS™ mechanics will be released this July.