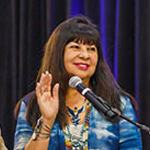 Lynn Valbuena, Chairwoman of the San Manuel Band of Mission Indians began her term in April 2022. She has been focusing on serving her tribal community and continuing efforts to strengthen the Tribe’s Serrano culture, governmental sovereignty and service obligations to San Manuel citizens.

The San Manuel Department of Education Programme’s purpose is to assist in the implementation of the Tribe’s educational vision. The Department builds and develops services and programmes and education opportunities for Tribal families.

Meanwhile, the San Manuel Environmental Department’ focuses on protecting Tribal Lands and resources on the San Manuel Reservation. The San Manuel Band of Mission Indians often sponsors community events and activities in the Inland Empire and across the Indian Country.

In September 2018, the San Manuel Band of Mission Indians awarded a three-year, $960,000 gift to California State University to increase college-going rates and success of Native American students as part of the Native American Enrolment and Achievement Initiative.

While under Valbuena’s leadership, the San Manuel Band of Mission Indians was awarded two `Responsible Business of the Year` awards at the Global Gaming Awards, in 2021 and 2022.

She was the Tribe’s first Housing Commissioner and held several Officer positions on the Tribal Council, including Secretary/Treasurer, Vice Chairwoman and is now in her fifth term as Chairwoman.

Valbuena is also currently serving her 27th year as Chairwoman of the Tribal Alliance of Sovereign Indian Nations (TASIN).

Speaking at San Manuel Band of Mission Indians’ success at the Global Gaming Awards Las Vegas 2022, Valbuena said: “It’s an honour for us to be up here with our team for this award. It’s a team effort as we always say. For a Tribal Government to be recognised, not a corporation, is amazing. For us to work together with these corporations and build those partnerships in collaboration with all of you makes us so happy.” Lynn Valbuena