This year’s March Madness has punched above its weight class in underdog triumphs and Cinderella stories. The most surprising upset, though, may be the reemergence of Las Vegas looking as it did before the Covid-19 pandemic. 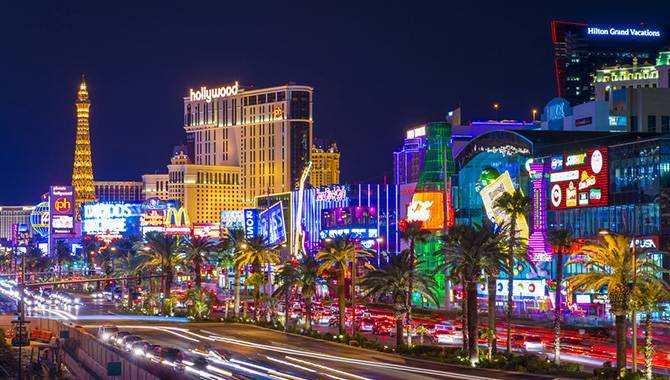 This year’s March Madness has punched above its weight class in underdog triumphs and Cinderella stories. The most surprising upset, though, may be the reemergence of Las Vegas looking as it did before the Covid-19 pandemic.

The action began to pick up last Thursday night, which marked exactly one year since Nevada Gov. Steve Sisolak ordered the state’s casinos temporarily closed. At MGM Grand Parking Garage, the lot was so full that it took several attempts to find a spot. Inside, the casino moved at a pace not seen since the start of the pandemic. Table games and slots were played in every direction, bars were filled and people dined at restaurants and attended shows.

Outside, crowded escalators shuffled bachelor parties and families alike, while street performers solicitated anyone within arm’s length. It was like the Las Vegas all of us remember, only with mask wearing, sanitiser stations and a few more closed-off restaurants than before. Weekend hadn’t even arrived.

Three days prior, Gov. Sisolak announced casinos could expand to 50% capacity, an increase from 35%. The move was likely designed with the upcoming NCAA Tournament in mind. The event annually attracts tens of thousands of sports bettors eager to watch and wager on every game.

By Friday, McCarran International Airport was inundated with inbound flights, while Californians drove into town en masse. Visitors were greeted with the first 80-degree day of the year and weather remained balmy throughout the weekend.

At newly opened Circa Resort and Casino in downtown, demand was so high that average hotel room rates shot up to $399 a night, up from $100 the weekend prior. Circa’s outdoor pool facility, Stadium Swim, attracted thousands of people during NCAA Tournament games. Pictures and videos of people standing close together, maskless, drew instant scorn on social media.

Indoors, Circa’s sportsbook competed with Westgate SuperBook as the largest screens to broadcast games. In a classic promotional move, Westgate offered $40 in casino match play and a free bucket of beer to anyone who signed up for and deposited $100 into the sportsbook’s mobile app. Even with that offer on the table, many Westgate bettors were content waiting in a line several dozen people long all to wager in person.

The Strip and Fremont Street Experience downtown were the places to be at night. Crowds gathered in the thousands at each location. Though visitors are asked to wear masks at all times, few seemed to follow those rules once they got outdoors.

Sights of large crowds pressed tightly together is sure to provoke debate in the coming weeks of what Las Vegas can do to prevent a Covid-19 super spreader event from occurring practically every weekend. Though the United States has seen a gradual decline in cases since January and millions of Americans are vaccinated each day, the country is far from out of the woods with this pandemic. One only needs to look at what’s happening in Europe to understand America’s control on the disease is tenuous.

While most Las Vegas visitors behave responsibly, there are plenty who don’t, which makes venturing out into crowded places a public health danger to us all. In response, operators need to enforce social distancing rules to encourage their employees to get vaccinated as quickly as possible.

On that front, there’s positive news. Hospitality and casino workers in Nevada have been receiving vaccines for nearly two weeks. And beginning April 6, all Nevada adults ages 16 or older will be eligible. Vaccinating hospitality and gaming industry workers and their families is the surest way to protect the community – and keep Las Vegas flowing with the level of energy it had this past weekend.