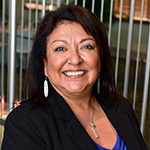 Sheila Morago was raised on the Gila River Indian Reservation where she is an enrolled member.

She is an experienced Executive Director with a demonstrated history of working in the non-profit organisation management industry.

The purpose of OIGA is to educate and disseminate information to the tribal, federal and state governments and the general public on issues relating to tribal government gaming.

Morago became the Executive Director of the Oklahoma Indian Gaming Association (OIGA) in 2011, a position she still holds today.

Between 2001 and 2004, she served as the Director of Public Relations for the National Indian Gaming Association (IGA).

Morago began her career in tribal gaming in 1994 when she was appointed Director of Marketing for the Gila River Casinos. Before joining AIGA, she was VP of National Relations for Initial Impressions based in Tempe, Arizona, where she was responsible for all political and public relations for tribal and non-tribal clients.

search for knowledge and the provision of scholarships for eligible individuals in order to attend accredited colleges, universities and trade schools in Oklahoma or other states.

Sheila Morago sat down with Gaming America in an interview during Oklahoma Gaming’s attendance at G2E2022.