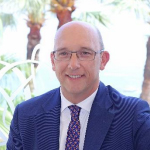 Under the impetus of Jean-Luc Biamonti, Chairman of Monte-Carlo SBM and the management of Camia, the casinos of Monaco have been able to adapt by having their offers evaluated, retaining their customers, and attracting new ones, while developing responsible gaming.

Camia acted to make Monaco become a member of the European Casino Association (ECA) in 2017 and he was elected Vice Chairman of the Board in 2020. ECA brings together some thirty countries in Europe. Camia is married and has two children. Passionate, dedicated and an achiever, he is the first native Monegasque to complete the 6 “World Marathon Majors” as of 2021.

Casino de Monte-Carlo won various awards in 2019 and 2020 – Casino of the Year at the Global Gaming Awards London.

Born and raised in Monaco, Camia received a Master of Science degree in Economics and a Hotel Management diploma, and joined Monte-Carlo Société des Bains de Mer in 1994, after several international experiences including Waldorf Astoria Cavalieri in Rome, The Westbury in London, and the Lutetia Hotel in Paris...

After holding various management positions within the company and graduating with a Corporate MBA, Pascal Camia was successfully promoted to General Manager of Hôtel Hermitage Monte-Carlo in 2011.

Promoted to Vice-President of Gaming in December 2015, Camia had a clear vision of developing the world’s leading luxury land-based casinos. In the process, he reinvigorated both the Casino de Monte-Carlo and Casino Café de Paris as the cornerstones of the company, putting Monaco as the most exclusive gaming destination in Europe. He offered guests unique moments within their gaming experiences.

In 2021, Camia was appointed Chief Operating Officer (COO) of the company. In his new mission, he leads the Group's three historical business divisions, which until now have been split into two departments, Gaming and Hospitality. An evolution in continuity in the context of strengthening the integrated Resort strategy, creating synergies between products to emphasise the client experience with a strong CRM programme (One Customer).

“Pascal Camia has had a successful career in the hotel and gaming industry and has succeeded in five years in making Monaco the most exclusive gaming destination in Europe. In these new functions, he has enabled us to strengthen the Group's positioning as a key player in luxury tourism with a globalised customer journey in our Resort.”

At ICE London 2022, Gambling Insider spoke to Camia about the impact Covid-19 had on business operations.