Macau’s shift away from VIPs 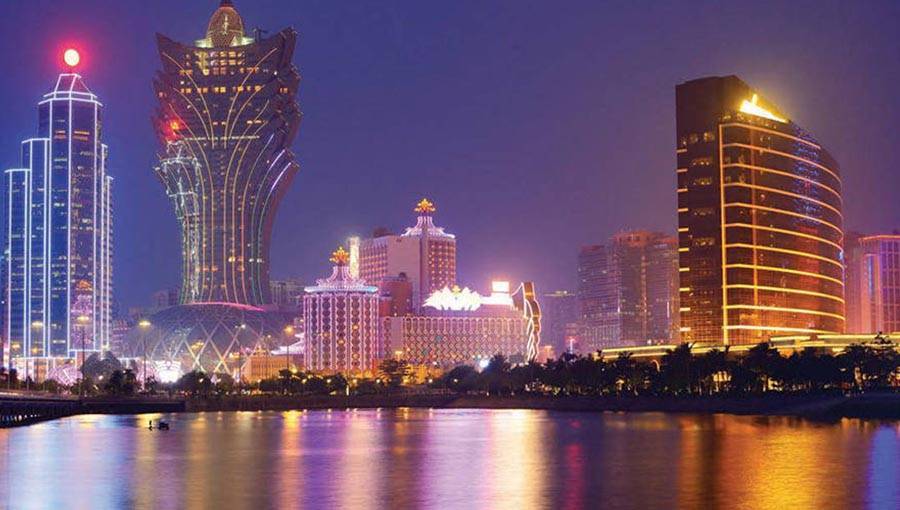 ﻿With Macau shifting its focus away from VIPs and towards the mass market, Tom Lewis looks at the reasons behind the change and how the operators are responding

A tuxedoed lead and supporting cast, a grandiose, water-bound entrance through the mouth of a dragon and sleek, softly lit gaming tables.

Though perhaps stopping shy of anticipating regular tussles with hired guns and the occasional Komodo dragon, the casino James Bond finds himself in midway through 2012’s Skyfall may be the first image that springs to the mind of the layman upon mention of Macau. Exclusive, VIP gaming has formed the crux of the peninsula’s economy for a number of years, with the Sands Macau and Wynn Macau setting up shop in 2004 and 2006, catering principally to moneyed tourists from the Chinese mainland.

However, if there ever was relevance in this image to Macau’s casino sector, that relevance has been slipping further from the truth in the past two or three years. The contribution of VIP baccarat, the special administrative region’s most popular game, to Macau’s gross revenue from games of fortune has been in decline since 2013, experiencing a 40% year-on-year drop to 127.8bn patacas between 2014 and 2015. While this must be set against the overall decline in Macau’s GGR, which fell for the 24th consecutive month in May, the contraction in VIP baccarat is a fall more dramatic than that experienced by any other game of fortune.

Indeed, the Macau Government Tourism Office recently published a paper, open to public consultation until 22 July, detailing its conservatively titled “master plan” for the development of the region’s tourist trade. Significant among its recommendations is the desire to diversify the promotion of its tourism products, with casinos felt to exert “too much influence” on Macau’s tourism branding: “Macau has the potential to exhibit an impressive image by reconciling its resort facilities, MICE (meetings and conventions), arts and festival events all into one integrated brand.” In short, the document is indicative of a change in the region’s tourism strategy, re-positioning away from VIP gambling and closer to a broader, mass market appeal.

Macau’s shift in the direction of the mass market is one that has come about “both by design and by necessity” according to Grant Govertsen, Managing Director and the Head of Asia Equity Research for boutique investment bank Union Gaming. “By necessity, given the anti-corruption and anti-extravagance campaign in China that has resulted in a greatly diminished VIP story. Going forward, we would expect casino operators to continually place a much greater focus on attracting mass market and premium market customers relative to VIPs”.

Desmond Lam, Associate Professor of Marketing at the University of Macau, expands on the factors behind the gambling sector’s move towards the mass market: “The market in Macau has been reactive (versus proactive) in the past. Since liberalisation, while the mass market shows great potential, operators have been keener on building their market share via the VIP segment.”

“The anti-corruption drive in China, which started about two years ago, forced operators to rethink their long term strategy as it dramatically affected their VIP gaming revenue and VIP gamblers’ numbers. Along with structural downturn and greater call for economic diversity from both the Chinese Central and Macau governments, operators began to realise the importance of moving away from hard core gaming-centric (with focus on VIP) into a more diversified leisure gaming model.”

While Govertsen is quick to point out that while there has been “very little, if any direct targeting of Macau as part of Beijing’s ongoing anti-corruption campaign”, it has certainly impacted on junkets, a major source of capital for VIP gamblers. Junkets act as middlemen for VIP gamblers in Macau, organising trips for wealthy groups and individuals from mainland China, lending these VIPs money and collecting debts upon their return to China. Their operation has been limited by Xi Jinping’s anti-corruption drive, with several suspected of liaising with triads for the purposes of debt collection, so a number of the junkets’ VIP customers were “swept up in the campaign”. Desmond Lam is swift in summing up the impact of the pressure junkets now face: “Greater governance over junket operations will only help push the operators to make the shift to the mass market. This is long overdue and should have been dealt with in the past.”

Praveen Choudhary, a managing director at Morgan Stanley, notes that “junkets generate around 85% of VIP business”, and their travails in the face of the Chinese president’s anti-corruption manoeuvring has undoubtedly had a negative impact on VIP business. Respected gaming industry commentator Julian Rogers believes this to be the primary reason behind the move to mass market, saying: “The shift has been caused mainly by a crackdown by the Chinese government on junkets, which provide credit to VIP players as money is limited from leaving the mainland. Lots of junkets are linked to organised crime and many have folded, while VIP rooms have been closed or mothballed.”

In terms of the response of major operators to this shift, Praveen Choudhary suggests that there is little cause for them to exhibit major concern. “Many operators have shut down their VIP rooms and used those tables for mass business”, notes Morgan Stanley’s Head of Asian Gaming, Hong Kong Property and Conglomerates Research in Hong Kong. “Mass is a higher margin business and thus it is not a major concern for operators.”

Desmond Lam indicates that the operators are receptive to the call to change, “and see it in the form of a drastic reduction in VIP numbers. As such, they are planning for a reduced VIP-focused model and moving into a more non-gaming-centric model. As the operators move to develop the mass market, which is actually more profitable, they need to start thinking of how they can diversify their gaming portfolio with the mass market in order to provide greater unique values; presently, every casino is the same and offer no unique customer experiences.”

Although Macau’s casinos will be far from homogenous in their response to the changing landscape of the market, Grant Govertsen argues: “Sands China has consistently had a much greater focus on the mass market – hence their market leading position in terms of mass market revenue, number of hotel rooms, number of non-gaming amenities, number of gaming positions and so forth. We would expect some operators to try to follow the Sands model, although this will be difficult for most operators given their lack of developable land. As such, we would expect some operators to place a greater focus on attracting premium customers and let Sands and Galaxy, for example, have outsized shares of the non-premium mass customers.”

The drive to attract mass market customers is apparent in many recent and upcoming developments in the region, both with regards to the casino industry and Macau’s infrastructure. Melco Crown Entertainment’s Studio City Macau opened its doors in 2015, on the back of a one-off gig by world famous popstar and fiancé to James Packer, Mariah Carey. The casino boasts several mass market attractions, including the “Golden Reel”, the world’s first ferris wheel with a figure of eight design, which claims to be the highest in Asia and is resplendent between the resort’s two central towers. The Batman Dark Flight ride is a 4D simulation aimed squarely at the mass market, with the obvious aim of drawing in families and tourists on the back of the DC Comics character’s successful run at the forefront of Hollywood cinema.

Julian Rogers notes the importance of non-casino attractions to extending Macau’s development in enticing mass market customers, with Galaxy Macau looking to include a theme park as part of phase three and four of its development. He says: “A massive water park has been built near Hengqin and other facilities are earmarked. Theme parks are really popular across the mainland and the $5.5bn Disney Shanghai is about to open. Theme parks could help to attract more Chinese tourists to Macau who don’t just want to play baccarat.”

However, the prospect of a Macau fast on its way to becoming a Vegas-esque hub of all round entertainment is one that has been broadly rejected by the analysts surveyed by Gambling Insider. “We think it is very unlikely”, says Praveen Choudhary. “Visitors to Macau are mainly interested in gambling, thus other attractions do not make enough money. While non-gaming attractions are growing, we are far from getting closer to Vegas.”

Grant Govertsen echoes Choudhary’s sentiments, saying that: “Macau will slowly get closer to being more Vegas-like in that a greater proportion of revenue will come from non-gaming. However, it will probably take decades to get there and it will need to be done in close coordination with Hengqin Island in Zhuhai in order to make it a reality.” However, Govertsen offers the caveat that in time “there’s no reason that the broader region can’t become both the Las Vegas and Orlando of Asia.”

As pointed out by Desmond Lam, however, it is unlikely we will see a gaming and entertainment metropolis which directly mirrors Las Vegas spring up in Asia. “Macau is unique and has many unique offerings as it is. For example, it has a rich cultural history that can be capitalised on more in future. It is important to note that Macau is Macau and Vegas is Vegas. While entertainment plays an important part in Vegas, entertainment in Macau will be different and unique.” As Julian Rogers explains, while Macau may slowly be heading in the same broad, diversified direction as Vegas, “clubbing and pool parties probably aren’t going to be a hit in the former Portuguese colony.”

The construction of the Hong Kong – Zhuhai – Macau Bridge will be of undeniable aid with regards to getting a greater a number of mass market customers into Macau. A 50km road network that will connect the three major cities on China’s Pearl River Delta, the project is expected to cost upwards of US$10.6bn and reduce travel times between Hong Kong and Macau from four and a half hours to 40 minutes. This sweeping improvement to the region’s transport links will ease the entrance of new, mass market customers into Macau’s resorts and casinos, and not before time, according to Julian Rogers: “Macau needs to up its game because it faces increasing competition from places like Manilla.”

The looming entrance in earnest of the mass market appears inexorable, although Desmond Lam suggests that “people still have a wait and see attitude, while trying to develop their non-gaming aspects.

“I think the operators need to be more proactive and redesign their package to bring in new crowds.”