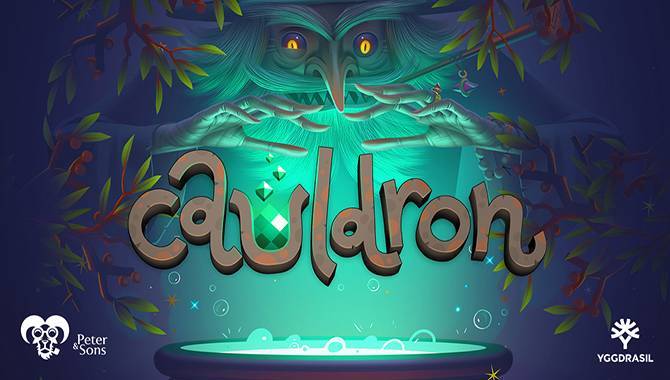 13th May 2021 – Yggdrasil and Peter & Sons have combined forces to release their latest YG Masters creation, transporting players on a magical journey to find the powerful Cauldron that is the source of all dreams.

The game, powered by Yggdrasil's state-of-the-art technology GATI, is set in the deep caves of Algroth many moons away where the blue wizard guards the Cauldron that players seek to discover hidden treasures and huge prizes.

This 5x3, high-volatility mythical slot comes with free spins and super free spins which is unlocked by collecting scatter symbols. When three or more scatters land on the reels, it triggers up to 10 free spins. A win on a high paying symbol is upgraded for all subsequent spins and pays double. Each upgrade also awards an additional free spin.

When a bonus scatter lands on the reels it gets collected with each symbol awarding one point to the game's progress bar. Reach 770 points to unlock the super free spins mode. In the feature, all high symbols are upgraded, and low paying symbols removed from the reels, giving players even more chances to win big.

Consistent with Peter & Sons' distinctive style, Cauldron is beautifully designed with the illustrations and graphics taking the game to another level. With the blue wizard looming over the bubbling pot waiting for the magic to happen, and mythical creatures filling the reels, the game is different to anything players have ever seen before.

Peter & Sons has developed and released three premium titles via the YG Masters program since it became a partner in October 2020.

Stuart McCarthy, Head of Partner Programs at Yggdrasil, said: "Cauldron is another impressive game from Peter & Sons that we are thrilled to release via YG Masters.

"The creative look and feel of the game really stand out and immediately immerse players in a fantasy world full of thrilling features and big win potential. We are certain that Cauldron will be a massive hit with players like Peter & Sons previous titles."

Yann Bautista, Business Development Manager at Peter & Sons, said: "Being part of YG Masters has given us the momentum to create several premium titles within a short space of time and achieve a great reach through Yggdrasil's distribution network.

"With Cauldron, we bring a touch of magic to players while they hunt down big wins and enjoy our thrilling features in a beautiful setting."