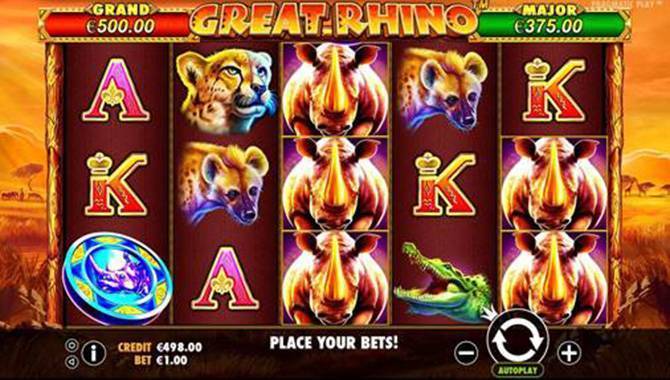 Online slots developer Pragmatic Play is taking players on a journey across the savannah in Great Rhino, a feature-rich entry into its acclaimed content portfolio.

Designed with an African feel in mind, the grasslands of Great Rhino showcase nature-themed symbols across a 3x5 reel video slot, the rhino joined by a cheetah, flamingo and fearsome crocodile.

Announcing the latest launch, Melissa Summerfield, Chief Commercial Officer at Pragmatic Play, said: “We take great care in crafting the industry’s premier collection of proven games, and the launch of Great Rhino brings players an exciting and feature-filled new title that will capture the imaginations of slots fans new and old.”

When two full stacks of rhinos appear the Super Respins mode is triggered, with rhinos stampeding across the screen and awarding players with a pool of three respins. This pool grows by one for every new rhino revealed and pays out the grand or major jackpot when 14 or 15 rhinos appear.

A casino chip featuring the great rhino serves as the game’s wild symbol, taking the untamed plains to new levels of excitement alongside the Umbrella Thorn Acacia Tree bonus symbol, which launches the free spins mode when three or more spin onto the screen.