Back to the future for KPMG eGaming Summit 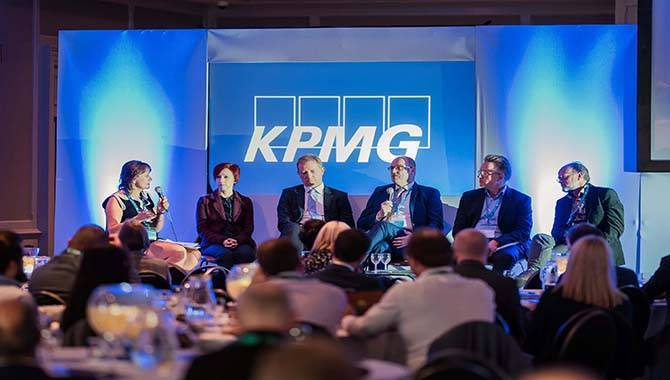 While this year’s KPMG Isle of Man eGaming Summit returned to its original home at the Comis at Mount Murray Hotel and Resort last week, it was evident that the industry has moved on light years since the first Summit took place there in front of a fledgling industry in 2010.

As Chief Minister Howard Quayle commented in his opening address, eGaming now (along with ICT)makes up 28% of the Isle of Man’s economy, with a growth rate of 15% year on year. It was an industry, he said, of which the Isle of Man should be proud, adding that the Island was “a jurisdiction of choice for eGaming and ancillary digital services.”

Mr Quayle was addressing over 250 delegates who had gathered at the 2018 event to hear the latest news and views from industry leaders and to gain a better understanding of the challenges and opportunities facing eGaming over the coming years.

His speech was followed by a presentation from the Isle of Man’s Department for Enterprise Digital Chair Lydia Barbara, who outlined the current framework of the Island’s Gambling Supervision Commission and explained the role of the newly formed Digital Agency. She then led a panel session on “The Isle of Man – A Digital Destination for Gaming” that focused on the reasons why a number of companies had chosen the Isle of Man as their headquarters.

Chris Rogers from the UK Gambling Commission then kicked off the main theme of the day which was “Raising Standards Together” with an appeal for all those working in the industry to collaborate and share information on the effectiveness of customer protection measures. KPMG’s Micky Swindale, who was the lead initiator of the eGaming Summit series, then took to the stage with an update on KPMG’s #WeAllWantToPlay initiative, which aims to drive diversity in the industry, discussing the challenges that women in particular still face in getting appointed to senior roles.

Nathan Beaver, KPMG Customer & Digital Practice Partner, looked at how innovation is impacting customer experience and expectations, citing voice recognition and speech to text as examples of technology that are already in use and anticipated to quickly become the norm across many different industries.

Dan Waugh from Regulus Partners then explored whether eGaming companies are really putting customers at the heart of their business and how the continued negative publicity surrounding gambling risks losing sight of the enjoyment that people derive from it. He also took part in the following panel session on “Consumer Protection: Enforcement and Actions” which was led by Richard Williams of Joelson.

As well as providing interesting debate about current activities, this session invited audience participation with a number of polls. These revealed that the majority of attendees (61%) felt the UK Gambling Commission’s enforcement activity was “about right”, with 33% saying it was “too much”. There was general agreement that enforcement was leading to improving standards but less consensus on whether industry would raise standards without regulatory action and on the proportionality of financial settlements.

After an enjoyable lunch withbeautiful panoramic views in the Snaefell Restaurant, delegates returned to the conference room to hear two presentations on “Protecting Customers”, one from Marc Etches of GambleAware and one from Gillian Wilmot of the Senet Group, each of whom outlined their organisation’s plans for the future.  Ms Wilmot then led a panel session that explored how operators and industry bodies could work together for the common good.

Towards the end of the day there was a review of recent M&A activity by a panel chaired by KPMG’s Head of Deal Advisory Kristan King, followed by a lively “Industry View”panel in which Russell Kellydrew lively comment and debate from Guy Templer (Stars), John Coleman (Microgaming), John Spellman (Annexio) and Magnus Grinneback (Mayfly).

Minister for Enterprise Laurence Skelly made a closing addresscongratulating KPMG for an excellent event and affirming the Government’s commitment to maintaining the Isle of Man as a premier jurisdiction and world class location for eGaming business.

Commenting later on the eGaming Summit, KPMG Managing Director Russell Kelly said it had been another valuable and highly instructive day for anyone involved in the industry:

“The KPMG eGaming Summits seek to draw out key issues for anyone working in the eGaming space and to provide a number of viewpoints, as well as key insights, that help businesses navigate the changing regulatory landscape and formulate future strategy.

“We are privileged to have so many knowledgeable speakers and industry experts supporting us, and we thank them for their very constructive contributions.

“We are also hugely indebted to our many sponsors who help us make the event possible. These include Continent 8, BostonLink, Cyberscience, Isle of Man Department for Enterprise, Joelson, LottoGo.com, Manx Technology Group, Manx Telecom, Microgaming, Newfield, Quanta and SMP eGaming.”

A full report on the eGaming Summit will be published later in the year.