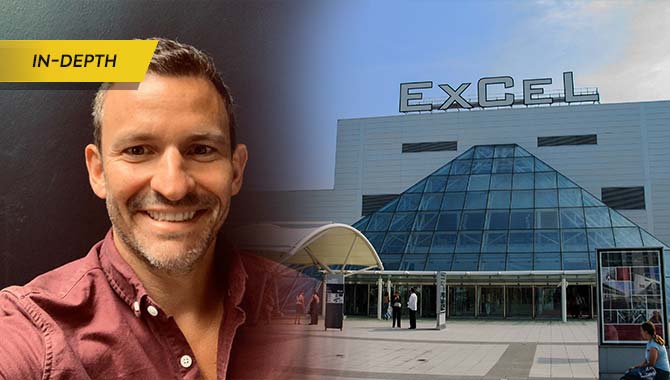 What can we expect from ICE London this year?

From my perspective, I've been going to ICE since 2004, but I’ve only really been involved for the last two years. Last year was definitely not the ICE that I remember from a few years back, pre-pandemic. So for me, I am so excited just to put it on again with everyone under one roof. I think what makes it exciting this year is we don’t really know where it's going or how it will land. But right now, every data point is saying that it's going to be the biggest and best one yet. If you look at LinkedIn, every event organiser will tell you they’re up on numbers, and they've got this many people coming and so on. Some of it is questionable, some of it's real. And actually, it's so nice to have real numbers to put out, like double-digit percent rises expected.

So that's exciting, but I’m more interested in what we’ve managed to achieve with this event. There’s been a lot of innovation and investment, as well as things around player safety. We’ve moved the Consumer Protection Zone to the front of the show; we've doubled the size of it too. So that's £200,000 ($248,000) worth of space that we’ve dedicated to the area, on top of donations we've received from the industry. This was something I felt was important for us as a business, but also the sector overall. It’s the little things like this that I’m excited about.

Last year at ICE, Gambling Insider received plenty of positive feedback from interviewees about the very Consumer Protection Zone you just mentioned. Can you expand on why promoting this, and putting it front and centre, is so important?

When I came on board to run the division in 2020/2021, I felt that Clarion Gaming had somewhat lost touch with the market. I think people saw us as more of a supplier or corporate entity, rather than a partner to the sector. So one of the things I did was look at what is important to the industry; what could we do to be a partner? It doesn't have to be about making money 24/7. So we decided to focus on the big pain points in this industry. That’s the need for innovation, player safety, consumer protection. Consumer protection is something that needs to be recognised, as well as everything around regulation and compliance.

I think people saw us as more of a supplier or corporate entity, rather than a partner to the sector. So one of the things I did was look at what is important to the industry; what could we do to be a partner?

The first thing I really wanted to do was look at consumer protection, because ICE is like a looking glass into the industry, particularly for online operators who don’t have shops. It’s important to remember too that there’s the Gambling Commission, the Department for Digital, Culture, Media & Sport, legislators and regulators from around the world coming to the show, as well as the mainstream media. So what do we want our message to be to all those stakeholders? And how do we create an environment for everyone in the industry to come together to talk about things like player safety? The focus on consumer protection has really come off the back of these conversations.

It was a bit of a cultural change and education doing this, and the question is, how will it pay back in the long term? But it comes back to our aim, asking: how can we help to be part of driving innovation and change in the market? Have we got it right yet? Not really. But are we doing better than we did two years ago? 100%. It's bigger – and there’s a lot more investment in it. I think if we dedicated a lot of time to it, we’ll see lasting results over the next couple of years.

There has been speculation that ICE could move from London in the coming years, is there much truth in this?

It will definitely be in London in 2024. I think it’s important I keep saying this because of the number of calls and emails everyone's getting constantly about this. Over the last 18 months, we’ve been working with a tonne of different stakeholders and customers. It’s important to keep the long term in mind, to make sure we’re working in the right city, the right venue, with the right local support with a good cost base and affordable travel in and out of the country. We’re looking at all these different things in depth.

There’s a massive journey ahead, with a lot of work involved. I think people can underestimate how much work is involved in moving an event of this scale – but the decision will largely come from our customer base. We wouldn't be having these conversations with the customers if they weren't saying we need to look at alternatives to London because of a whole variety of different reasons. And if it turns out that, actually, an alternative city is the right place, we'll go there.

At the end of the day, if you're not making customers happy, we're not doing the right job. We’ve started to work on things like economic impact studies and the value of ICE to certain cities, over more than just the three days of the event. But every year is significant and the discussions we have are always for the benefit of ICE. I think we're able to negotiate it in a very different way than anyone did previously.

Another hot topic within the sector... how can you use your position to boost diversity in the industry? How high up does diversity rank on your agenda?

This has been a core focus for Clarion over the last 2-3 years. It's one of our five core pillars – people – and underneath that, of course diversity is included. One of the things I talk about is the power or the influence we have to drive that change. And we have to be really intentional about that. That means sometimes it's hard work, and can come down to simple things, like how we market such as the images and words we use. It can then be intentional, such as having quotas on the diversity of our conference streams.  I've been pushing the drive for diversity quite hard. In some markets, it’s easier to do than in others.

Another thing we’re trying to do is ban all-male panels, or ‘manels,’ because we have diversity quotas – so our team needs to work hard to ensure we meet these quotas. I ran an affiliate event where we had a 100% female conference despite a lot of pushback from the industry. It was more like a statement to say, “this is how extreme you have to go just to readjust the balance.” So it's really important for me personally, and we reinforce that in terms of what we do internally. This covers many areas such as how we hire staff, how we promote and what we pay for training and education.

ICE is like a looking glass into the industry, particularly for online operators who don’t have shops

Finally, we wanted to ask more about your role. How has it changed at the top of the Clarion Gaming division? What are the most rewarding parts of your job and what are the most challenging?

I'm really enjoying myself now because I’m over two years into this role, and a lot of the plans we started to put in place are starting to come to fruition. We've got such an exciting journey over the next three years, and I guess I see it in three areas. We've got our Live! proposition in EMEA, which is all about ICE and its long-term future. Then it’s about how do we scale iGB Live!? How do we find a position for that in such a crowded event market? For me, it's an event about doing deals – and that is what it will always be; we need to push that on further. We also launched a new event in Germany in partnership with Affiliate Summit – so we’re bringing different sectors together to drive growth and innovation.

The second area is Live! North America where we’ve got an extensive partnership with the Indian Gaming Association (IGA) now focused on the IGA Exhibition. We’re also launching IGB Live! North America – New York to be specific, at the Javits Center. This is in partnership with the Indian Gaming Association so as well as working with the commercial gaming operators, affiliates and suppliers it will focus on helping the tribes move into the iGaming and sports betting markets in a way that supports their culture and values. The third area is digital, which is going through a really big growth curve. We’re now going to take a step back with that and invest quite a significant amount into the technology stack, the people and the way in which we manage the business.

We’re hoping our digital arm will look really different by this time next year. This is where my focus will be over the coming years – on these challenges.