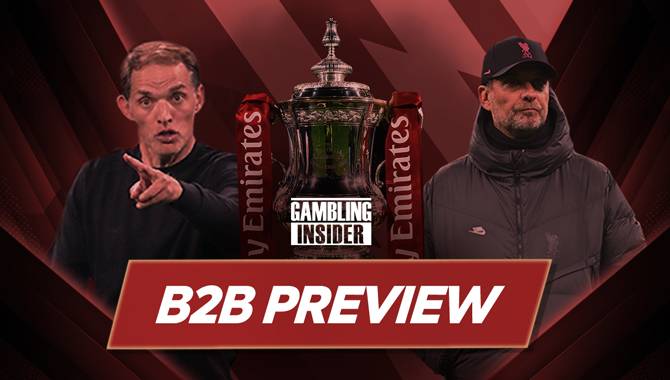 As Chelsea and Liverpool prepare to face off in Saturday's FA Cup final, Gambling Insider surveyed the sports betting industry to measure expectations.

Ahead of the second cup final meeting this season between the two sides, projections are naturally not as high as ahead of the Champions League final (Real Madrid vs Liverpool) on Saturday 28 May. There is still massive interest, however, in football's oldest ever cup competition.

In its 150th anniversary, the FA Cup plays host to a Chelsea side with one last chance to secure silverware this campaign, against a Liverpool team that has already won the Carabao Cup and is looking for a cup treble.

But who are the bettors backing – and how?

Zohrab Karapetyan, Sportsbook Product Manager at supplier Digitain, tells Gambling Insider: “I would say the Emirates FA Cup final is one of the top four football betting events for Digitain and our partners.

"Historically, it has been the world’s must-watch football final for a long time, with global awareness and interest in English football. Nowadays, perhaps only the World Cup Final and the Champions League Final surpass it, in terms of international viewing figures and also in terms of football betting volumes.

Both teams have massive international support, especially in Asia, so we expect to have a hectic trading day. As a matter of fact – with one day to go, we have already accepted more than 80,000 bets on this gameZohrab Karapetyan, Digitain

"At Digitain, we’re expecting record volumes, given the global fanbase and support for the two finalists. Both teams have massive international support, especially in Asia, so we expect to have a hectic trading day. As a matter of fact – with one day to go, we have already accepted more than 80,000 bets on this game!

"Chelsea are the underdogs at around 3.5 to win in 90 minutes, with Liverpool around 2.0 or Evens to win in regulation time.

"Given the profile of the FA Cup Final and the media coverage generated pre-match, we expect to see high numbers of new recreational customers registering new accounts tomorrow across our 150+ partner network, which will normally generate more pre-match bets than for a normal EPL match.”

Liverpool to win in 90 mins popular

For operator Kindred Group, the FA Cup final is more comparable to a big occasion during the Premier League season.

Players on the group's brands (such as Unibet) have so far been favouring Liverpool to win without extra-time. When Liverpool overcame Chelsea in the Carabao Cup final earlier this season, the match went to extra-time and then penalties.

The team at Kindred Group said to Gambling Insider: ”The FA Cup final cannot compete with the Champions League, as it is more comparable to a big Premier League match.

"Naturally, the teams competing in the final impacts the interest in the match, but with Liverpool and Chelsea in the final this year, interest is very high. And looking back, it was similar with Chelsea playing Leicester last season.

"Our customers like Liverpool’s chances of lifting the trophy; but they are even more fancied on the more popular 1x2 offer, to win in regular time coming in on the Reds.”

At supplier Kambi, Head of Soccer Jon Hurst champions the popularity of goalscorer markets and the company's bet builder.

Chelsea striker Romelu Lukaku has been the most popular player on the Kambi network in the FA Cup, with Diogo Jota driving the most turnover in the competition for opponents LiverpoolJon Hurst, Kambi

Two forwards, in particular, have increased engagement throughout the tournament so far.

Hurst tells Gambling Insider: “The FA Cup final is always a highlight in the sporting calendar and it represents a big opportunity to drive engagement for sportsbooks. The game features two teams who consistently generate interest – Liverpool are still fighting for four titles; while Thomas Tuchel’s Chelsea will be desperate for a trophy following a Premier League season in which they have not quite hit the heights their early promise suggested they might.

“We’ll have an extensive offer available for our partners’ customers, including player props such as goalscorer markets, which can be combined with multiple other markets through the Kambi bet builder. Chelsea striker Romelu Lukaku has been the most popular player on the Kambi network in the FA Cup, with Diogo Jota driving the most turnover in the competition for opponents Liverpool.”

One of the biggest events of the year

Given the fact we have a Champions League final and World Cup to come in 2022, it's safe to say expectations are high for the rest of the year in football betting.

However, the team at sportsbook supplier Altenar still has high hopes for Saturday's FA Cup final, the domestic highlight of the year to date with regards to individual matches.

Altenar explains to Gambling Insider: "As a nationally important final, that traverses the world, Altenar predicts the sheer volume of audiences is going to skyrocket during the match, and we expect a final like no other between Liverpool and Chelsea!

"We predict an increase in bets placed as excitement brews for the 16:45 BST kick-off and, with this being one of the largest sports betting events this year (both within the UK and globally) we envision it will spark further participation with sports betting in general.

"The two Premier League teams will bring bettors far and wide to our partnered sites and, with it, deepen global love for football."

Finally, Paul Murphy, Commercial Director (Western Europe) at operator Betsson Group, talks us through his verdict for the game itself.

The Betsson executive is backing Liverpool to come out 3-1 winner during the 90 minutes, with African Cup of Nations winner Sadio Mane hitting the back of the net.

Liverpool are rightly favourites and it's been 16 years since they previously won it, so it's a trophy that has a lot of importance for the current squad and managerPaul Murphy, Betsson Group

"For the first time, we have the same teams competing for the FA Cup final as the EFL Cup final," Murphy tells Gambling Insider.

"The EFL Cup was a 0-0 stalemate, with Liverpool winning on penalties, but since then the clubs have gone in separate directions, with Liverpool still in the hunt for an unprecedented quadruple; and Chelsea stuttering to gain any consistency in form and results.

"Liverpool are rightly favourites and it's been 16 years since they previously won it, so it's a trophy that has a lot of importance for the current squad and manager. That said, it has huge importance for Chelsea too, and a win is the only way they can salvage what has fast become a disappointing season.

"If the best version of Chelsea shows up on the day – and it will take the best version – they have a chance of causing an upset. But, with a heavy heart, I think Liverpool will be too much for them, and win quite comfortably. Prediction: 3-1, with Mane to score."